NY Review of Books on ECCC 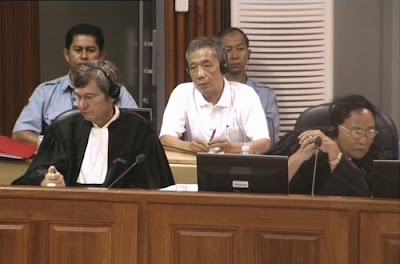 via CAAI
Thursday, 04 November 2010 15:22 James O'Toole
The New York Review of Books had a blog post last week on the ECCC by Stéphanie Giry, editor-at-large of Foreign Affairs. Giry writes about Case 001 and the extent to which Duch was able to exert his influence over the proceedings:
For his part in overseeing the torture and execution of at least 12,273 prisoners, Duch was convicted of war crimes and crimes against humanity, and sentenced to a 35-year prison term, with 19 years left to serve. But after spending much of the 77 days of court hearings expressing remorse, he is now appealing the sentence and asking to be released, claiming that he was neither one of the regime’s leaders nor among those “most responsible” for the Khmer Rouge’s atrocities, the only people the special court in Phnom Penh is entitled to try. This request reflects a dramatic last-minute shift in the defense’s strategy, from cooperating with the court to disputing its authority to judge Duch. That Duch could undermine the trial and its outcome in this way highlights its central flaw: all along, he was allowed to dominate the telling, and so influence the judging, of his own crimes.
Duch's shock bid for acquittal, Giry suggests, is part of a strategy by defense lawyer Kar Savuth to "[set] the stage for an early release a few years into Duch’s sentence". As the case moves to the Supreme Court Chamber, however, prosecutors are hoping to close off this possibility - in their appeal brief filed last month, they asked that Duch receive 45 years in prison "without the possibility of a parole".
Giry also notes in passing that "two army generals" are among the five suspects who are being investigated in advance of Cases 003 and 004 (and whose identities remain confidential). UN court spokesman Lars Olsen said, however, that "any names or positions figuring in the media are pure speculation".
Also last week, the American magazine The Nation had a lengthy piece on the International Criminal Court and the changing face of international justice. The ECCC is mentioned only briefly, but the article provides a nice overview of the progress of contemporary war crimes prosecutions around the world.
Posted by CAAI News Media at 11:21 pm