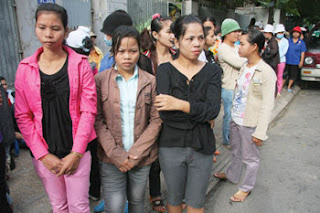 Photo by: Pha Lina
Employees from the Sun Ly Fong garment factory gather outside Phnom Penh Municipal Court yesterday, to protest against lawsuits filed against workers in connection with an August demonstration.
via CAAI
Thursday, 04 November 2010 15:02 Kim Yuthana
ABOUT 200 garment workers from the capital’s Sun Ly Fong factory gathered in front of Phnom Penh Municipal Court yesterday to protest lawsuits filed against workers in connection with an August protest at their workplace.
In August, roughly 160 Sun Ly Fong workers took to the streets to agitate for increased pay and improved working conditions at the Meanchey district factory.
Three union representatives were dismissed for allegedly inciting the strike, and the rest were ordered to return to their jobs in an injunction signed by Municipal Court Judge Kim Dany.
Ien Pov, one of the dismissed union representatives, said outside the court yesterday that he had played no role in inciting the strikes.
“The workers agreed to hold the strikes themselves because their rights were always abused by the factory owner,” he said.
Sun Ly Fong management could not be reached for comment yesterday.
Kim Dany said that she had not yet ruled on the legality of the original strike.
The work stoppage at Sun Ly Fong came several weeks prior to the September strikes that involved thousands of workers and affected factories across the Kingdom.
Unionists say that 94 union representatives remain suspended in connection with these strikes, and that 683 were dismissed. The Garment Manufacturers Association in Cambodia maintains, however, that only 67 representatives are suspended and 358 workers dismissed.
In a September speech, Prime Minister Hun Sen called on factory owners to drop their complaints and reach a settlement with workers that would allow them to return to their jobs.
During their strikes in August, the Sun Ly Fong workers submitted a list of eight requests to factory management, including a demand that they receive US$80 in severance pay for every year they had worked at the factory.
Posted by CAAI News Media at 10:38 pm