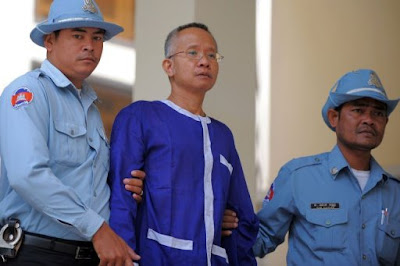 via CAAI
PHNOM PENH — Four Thais charged with illegally entering Cambodia were released on bail Tuesday but a fifth -- a high-profile nationalist activist -- was ordered to remain in detention, a prosecutor said.
The five were among seven Thais arrested in Cambodia on December 29 for illegal entry and trespassing on a military area, charges that carry a maximum combined sentence of 18 months in prison.
Two of the group -- including lawmaker Panich Vikitsreth of the ruling Democrat Party -- were already bailed last Thursday for health reasons.
Panich has said that he and his entourage crossed the disputed border by accident while inspecting contested territory.
Veera Somkwamkid -- a former leader of the "Yellow Shirt" movement -- faces an additional espionage charge for attempting to gather information that could affect national defence, an offence punishable by up to 10 years in jail.
"Only Veera Somkwamkid is kept in jail. The four others are released on bail," Ngeth Sarath, a prosecutor at the Appeal Court, told AFP after a closed-door hearing in which the five Thais appealed their earlier bail denial.
The four were released on bail of one million riel ($250) each.
It is believed that the six Thais who have been bailed will stay at the Thai embassy compound in Phnom Penh as they await trial, for which a date has yet to be set.
The neighbouring countries, long at odds over their border, have both said they would not let the border case strain diplomatic ties.
Thai officials have acknowledged that the seven were on Cambodian territory when arrested.
The Thailand-Cambodia border has never been fully demarcated, partly because it is littered with landmines left over from decades of war in Cambodia.
Posted by CAAI News Media at 11:57 pm