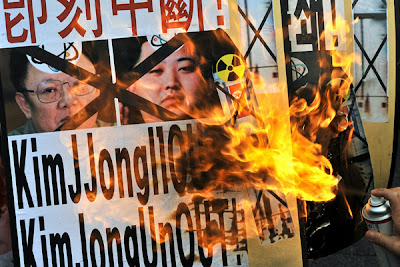 Here's advice for anyone hankering for Korean food in the Cambodian capital Phnom Penh or the tourist mecca of Siem Reap. Sit close to the door and with your back to the wall.
Cambodia has several Korean restaurants, most operated by South Koreans. But in Siem Reap there are two operated by North Korea and there's another in Phnom Penh.
Trouble started when South Korean restaurateurs condemned last year's attacks by the North on one of the South's warships and on its Yeonpyeong Island.
In retaliation, South Korean restaurant owners report their premises have been attacked by people "who appeared to be North Korean agents."
Seoul's embassy in Phnom Penh has recommended to South Korean tourist agencies that they avoid the North's eateries.
Posted by CAAI News Media at 7:55 am

All asian-foreigners go home, and please leave Cambodia and its people alone.