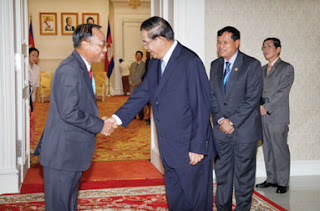 Prime Minister Hun Sen shakes hands with Indonesia’s Tourism Minister Jero Wacik at the capital’s Peace Palace. Photo by: Heng Chivoan
via CAAI
Tuesday, 18 January 2011 15:01 Soeun Say
Tourism ministers from the 10-nation ASEAN bloc endorsed a regional strategic plan for the sector during a meeting in prime minister Hun Sen’s Phnom Penh office yesterday.
The plan, which runs from 2011 to 2015, is intended to boost regional cooperation to ensure tourism growth within ASEAN, South Korea, China and Japan.
“We are convinced that, with close cooperation among the ASEAN nations and dialogue partners, we will be productive and the plan will be beneficial to all the members,” Cambodia’s Minister of Tourism Thong Khon, who chaired the meeting, told reporters yesterday.
As part of the strategy plan, he said, ASEAN members must strengthen tourism promotion and push development.
The expansion and strengthening of tourism services through human resources training could pave the way for better travel facilitation and connectivity in the region, he said. “We must reaffirm our commitments for sustained ASEAN tourism cooperation.
“The world has started recovering from the global economic downturn. We need to sustain ASEAN’s fame as the fastest growing tourism destination in the world.”
Tith Chantha, director general of the Ministry of Tourism, added that the region has the “most potential” of any destination in the world, but cooperation was necessary for development.
A meeting tomorrow with China, Japan and South Korea will inform them of the plan’s approval.
Posted by CAAI News Media at 11:01 pm