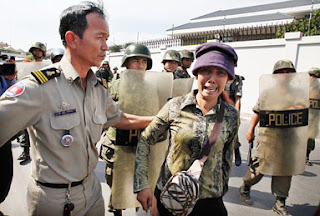 Police remove a Boeung Kak lake protester from the area outside the Chinese embassy in Phnom Penh yesterday. Photo by: Heng Chivoan
via CAAI
Tuesday, 18 January 2011 15:02 Khouth Sophak Chakrya and Rebecca Puddy
Controversy over the Boeung Kak lakeside development continued yesterday when villagers gathered outside the Chinese Embassy in Phnom Penh, calling on the ambassador to intervene with a Chinese firm involved in the project.
Around 50 villagers attempted to deliver a petition to embassy officials, only to be turned away from the gates by 40 military police officers.
Lakeside resident Tep Vanny, 27, from Daun Penh district’s Srah Chak commune , said protesters were calling on Chinese Ambassador Pan Guangxue to intervene on their behalf.
A Chinese company, Inner Mongolia Erdos Hungjun Investment Co, is involved in a joint venture with local firm Shukaku Inc to develop the lakeside.
“We are asking for intervention from the Chinese ambassador here so the developers in the Boeung Kak lake development will address our problems,” Tep Vanny said.
The villagers’ petition, representing the demands of 3,200 people living in seven villages around the lake, outlined their request that the Shukaku Erdos Hongjun Property Development Co Ltd – the joint venture company – pay compensation of US$1,500 per square metre of property lost to the project.
It also called on the firm to provide 15 hectares of land to residents displaced by the project.
The letter also said the villagers would not be opposed to the development of the lake if their terms were met.
Chinese embassy staff refused to exit the embassy compound to accept the letter, but villagers said they will return to the embassy and try again.
Yesterday’s events follow the violent eviction of around 20 villagers from their homes on Friday by Daun Penh district police and private security guards.
The homeless families are now living on the roadside amid the rubble of their demolished houses awaiting compensation from the Sino-Cambodian company.
Rights groups claim more than 4,000 families will be displaced by the controversial development.
The deal to develop the lake was announced as part of a $3- billion investment package by Inner Mongolia Erdos Hongjun Investment Co following a meeting between Prime Minister Hun Sen and the company’s chairman in September.
In its $3-billion investment, the Chinese company committed to building coal-fired power plants, real estate and metal processing plants for export and domestic use.
Chinese investment has poured into in the Kingdom following the January 2010 commencement of the China-ASEAN Free Trade Agreement, with initial investment in textile and garments now diversifying to include sectors such as hydropower, agriculture, construction and the development of special economic zones.
Posted by CAAI News Media at 11:18 pm