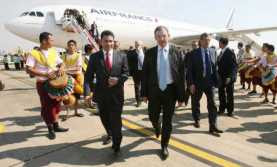 French Secretary of State for Transport Thierry Mariani (C-R), attends a launching ceremony at Phnom Penh international airport, Cambodia, 31 March 2011. Air France resumes flights to Cambodia after a 35-year interval. The thrice weekly flights between Paris and Phonm Penh via Bangkok, will utilise an Airbus A340, then in May 2011 will replace the Airbus A340 with a Boeing 777, with a greater capacity. EPA/MAK REMISSA
http://www.monstersandcritics.com/
via CAAI
Mar 31, 2011
Phnom Penh - Air France's first commercial flight to Phnom Penh in nearly four decades landed in the Cambodian capital on Thursday.
The arrival of flight AF274 marked the resumption of a service that the company terminated in 1974 as the Khmer Rouge was on the cusp of taking control of Cambodia.
The chief executive of Air France KLM, Pierre-Henri Gourgeon, said the reopening of the service to Phnom Penh after 37 years was 'really emotional.'
'(Cambodia) is a country that developed (bonds) in the past very strongly with France,' he said. 'We feel we are in a French-speaking area. We understand the culture.'
Air France ended its service in mid-1974 because 'instability was worryingly high,' he said.
Within a year Pol Pot's ultra-Maoist movement had captured the capital. The Khmer Rouge held power for nearly four years during which as many as 2.2 million Cambodians died.
Gourgeon said Air France would run three flights a week between the two countries, and confirmed a future schedule could include Siem Reap, the country's tourism centre and home to the famed Angkor Wat temple complex.
'Siem Reap is very important, but as far as I understand it, it was easier from a commercial and diplomatic point of view to start in Phnom Penh,' he said.
The new service will add 40 tons of cargo capacity weekly between the two nations, which Gourgeon said should help to boost bilateral trade.
Air France said it would operate Boeing 777 aircraft on the route, with a one-hour stopover in Bangkok.
The new Paris-Phnom Penh route is part of Air France KLM's strategy to boost growth by adding 11 destinations this year.
Tourism is a rapidly growing industry in Cambodia, and one of the four pillars of the economy along with agriculture, construction and garment manufacturing. Around 2.5 million people visited the country last year.
Cambodia has strong ties to France, its former colonial power. It gained its independence in 1953 after 90 years of foreign rule as part of French Indochina, which also included Vietnam and Laos.
Posted by CAAI News Media at 12:17 am