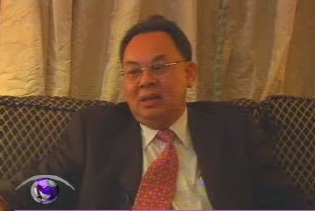 
via CAAI
BANGKOK, March 31 -- Thai Foreign Minister Kasit Piromya on Thursday said there is a possibility that only the Thai-Cambodian Joint Boundary Committee (JBC) meeting would be held in Indonesia, without convening a General Border Committee (GBC) meeting.
He said that until now the Thai Defence Ministry still hopes that Cambodia will host the 7th GBC meeting so that the JBC meeting would be the only meeting to be convened in Indonesia next month.
Indonesia called for both the GBC and JBC meetings to be held on March 24 and 25, but later postponed the dates to April 7 and 8 at Bogor, Indonesia.
The arrangement was part of an agreement to settle the boundary conflict between the two neighbours. The agreement included a plan to dispatch Indonesian observers to the disputed area adjacent to the ancient Khmer Hindu temple of Preah Vihear.
Mr Kasit said Thai and Cambodian officials were discussing the location for the observers to be stationed and the Thai ministries of defence and foreign affairs agreed that Thailand and Cambodia should decide the observers' location before the meeting.
He said Cambodia proposed 15 locations but some are in the contested area of 4.6 sq km near Preah Vihear temple, claimed by both countries, and at the heart of the dispute, so there was no solution to the matter.
The two sides were coordinating in an attempt to find the solution, Mr Kasit said.
Regarding the dismissal of the Constitution Court of the petition asking the court to decide if three Thai-Cambodian JBC meeting memos are international treaties needing parliamentary approval as stated in Article 190 of the Constitution, Mr Kasit said it would now be a matter of Parliamentary decision whether to approve the documents or not.
The Constitution Court Wednesday dropped the petition submitted through House Speaker Chai Chidchob by a group of 80 MPs, reasoning that now was the appropriate timestage for the court to have any injunction on the matter.
Meanwhile, the 'Yellow Shirt' People's Alliance for Democracy (PAD) which opposes approval of the JBC documents, said the group believed that the MPs would not cooperate with the government to vote in favour of the memos after the court refused to rule on the three documents.
Prapan Khunmee, a key PAD leader, urged Prime Minister Abhisit Vejjajiva to withdraw the issue from the agenda. (MCOT online news)
Posted by CAAI News Media at 12:30 am

Stop by my web blog - Rose