Looking ahead at the KR tribunal 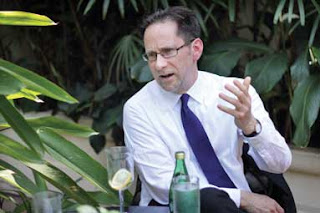 
via CAAI
Friday, 01 April 2011 15:03James O’Toole
Clint Williamson was appointed United Nations special expert for the Khmer Rouge tribunal last year, tasked with liasing with donors and the government and ensuring that the process moves forward smoothly. With final hearings in the court’s landmark first case, that of former S-21 prison chief Kaing Guek Eav, having concluded this week, Williamson spoke to The Post about fundraising, future cases and the impact of the tribunal thus far. Interview edited by James O’Toole.
The tribunal currently faces a budgetary shortfall of roughly US$18.5 million for this year. What is the status of the fundraising effort at the moment?
The financial situation is always on our mind at the court. The Yugoslavia and the Rwanda tribunals are funded by assessed contributions through the UN. This court, the Sierra Leone court and some of the other things that are going on like the Bosnia court, these are funded by voluntary contributions, so it’s a constant struggle to make sure the money is coming in as it’s needed. Simultaneously, we try to be very mindful of keeping the court’s budget as low as we can and trying to economise where possible.
Japan has been the court’s most generous donor so far. How will the disaster there affect the level of funding that’s available to the court going forward?
I think that’s a real concern. The Japanese have really borne an undue burden in terms of support of the court – they’ve provided almost 50 percent of the overall budget. They have been saying for the last couple of years that they would not be able to sustain that level of support indefinitely. The recent events in Japan have only compounded that problem – we’re hearing that from the Japanese government and I think everybody understands that. They’re going to have huge rebuilding bills and I think it’s going to have an impact on their overall foreign aid budget. Exactly what that will translate into in hard numbers, it’s hard to say, but I think it’s something that’s going to be a factor going forward.
Prime Minister Hun Sen and other officials have expressed opposition to the court’s third and fourth cases, which are currently in the preliminary investigation stage. Has this been an issue in your discussions with the government?
The dialogue that we’ve had with the government about this is just making sure that the judicial process is allowed to work, and we’ve gotten commitments from the government to that effect. These courts don’t operate in a complete political vacuum. You have political statements that are coming from governmental figures – sometimes they’re helpful, sometimes they’re not – but what you want to make sure is that what’s going on in the court is insulated as much as possible from that. You have to recognise that there are a lot of factors that the government considers, that the UN considers, that donor governments consider, but what you hope to do is not have those things overly influence the work of the court, and I think that’s the case, that it’s not doing that.
Decisions in relation to civil parties were clearly a controversial element of the first case, and in the second case, rule changes will see these people with a reduced role in the proceedings. Do you think implementing the civil party system in the first place was a good decision?
It’s a good question. This is the only one of these international courts that has included this civil party process. Obviously, the first time around, there were some hiccups, not only in the way that the proceedings were conducted, but admittedly, there was some unhappiness on the way that decisions were taken.
I think maybe it’s a little bit early to say right now whether it’s been a success or not. I think as other tribunals are established in the future, people are going to have to think about whether to include the civil party system or not. They’re going to have to look back and see how it worked over time, and I think the real test of it will be the second case, because it has a much bigger pool of victims. We’ll have to see how it turns out and whether it achieved the objectives it sought to.
What do you hope to see the court take from the experience of Case 001 as it moves forward with its work?
Well I think the fundamental achievement of Case 001 is that you’re going back, you’re looking at crimes that occurred 30 years ago, and you’ve got a lot of witnesses who are elderly and people that have suffered a lot, but the process worked. You were able to see something, I think, that had a huge positive impact on the country.
When you look at the fact that in a lot of ways, this whole area of history was sort of a taboo subject, what has happened in the court has opened that up – families are talking about it in their own homes, you now have it being taught in the schools. This is the sort of impact that the international community has hoped for for all these courts, but this is really the only institution that’s achieved that. I think as we go into Case 002, where you’re really getting into a comprehensive examination of the Khmer Rouge leadership, this is going to be a huge opportunity for this country to examine that period and to put it behind them.
Posted by CAAI News Media at 12:02 am