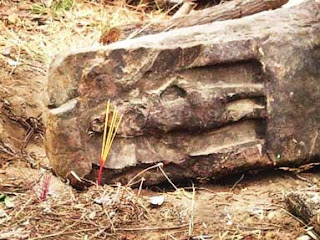 
Friday, 01 April 2011 15:02Sen David
Villagers clearing forest to build a school received a history lesson when they accidentally uncovered two Buddha carvings in Oddar Meanchey province on Wednesday, which authorities suspect were looted and buried by thieves many years ago.
The two statues of Buddha sitting cross-legged in a meditative pose, one weighing close to a tonne, were disturbed by villagers digging in a forest near the Dangrek mountains, far away from their homes, said Oun Reoung, chief of Trapeang Prasat commune where the statues were found.
“They were surprised to see them,” he said.
“We think that they are Khmer artifacts. The carvings show beautiful workmanship,” he said.
Oun Reoung could not confirm the age of the carvings but said they had been sent to Oddar Meanchey provincial Department of Culture and Fine Arts for expert analysis.
Hong Yeoun, director of the provincial Department of Culture and Fine Arts, said the carvings would be kept with about 50 other artifacts that his department had so far recovered.
“Oddar Meanchey province is an area where almost all of the artifacts are trafficked across [the border] to be sold abroad because we’ve seen many articles in which villagers found artifacts buried underground.”
The discovery of the Buddha carvings follows an announcement early last month by the Australian government that it would repatriate 30 Iron Age artefacts that had been posted for sale on the internet auction site eBay.
The artifacts, which included human remains, were believed to have been looted from Cambodia’s northwest, and included earrings and wrist and ankle bracelets.
Posted by CAAI News Media at 12:05 am

I believe that those thieves forgotten to reveal those carvings; and good to know that those carvings are still in fine. I think it would be better if these carvings will be place in the museum, so that it will be preserved for a long time and for the villagers to remember its discovery.