"Many bombs landed ... we are living in fear" 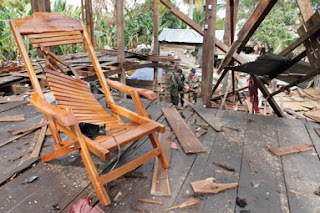 Photo by: Sovan Philong
A damaged wooden chair sits at a house that was destroyed yesterday by a 155mm shell fired from Thailand into Banteay Ampil district, in Oddar Meanchey province, near the Thai-Cambodian border. SOVAN PHILONG
http://www.phnompenhpost.com/


Monday, 25 April 2011 15:02Cheang Sokha and James O’Toole
Oddar Meanchey province
At least 10 soldiers lay dead yesterday following a third straight day of clashes along the Thai-Cambodian border near Oddar Meanchey province, as simmering tensions between the two countries once again spilled over into bloodshed.
Six Cambodian soldiers have been killed – three on Friday and three on Saturday – while another remains missing and 16 have been injured, the Ministry of Defence said yesterday.
Thai government spokesman Panitan Wattanayagorn said four Thai troops had been killed and 25 injured, with thousands of civilians evacuated on both sides.
The latest hostilities follow four days of fighting along the border in February, about 150 kilometres away near Preah Vihear temple. There, at least 10 troops were killed and dozens injured in clashes that led the two sides to appear before the Association of Southeast Asian Nations and the United Nations Security Council in an attempt to resolve the dispute.
As in February, both sides accused one another of touching off the fighting. Council of Ministers spokesman Phay Siphan said on Friday that Thai troops had opened fire first, while Thai Lt General Thawatchai Samutsakorn said Cambodia had “started attacking our temporary base with artillery fire”.
Clashes yesterday began near Ta Moan temple with gunfire that quickly escalated into exchanges of artillery, troops of the Royal Cambodian Armed Forces said. The thumping of shells was clearly audible 20 kilometres from the border in Oddar Meanchey’s Banteay Ampil district yesterday, as military trucks sped along the dirt road to the frontline.
Ta Moan and Ta Krabey, another temple along the border located roughly 10 kilometres away, are claimed by both Cambodia and Thailand and have been flashpoints for the latest fighting. 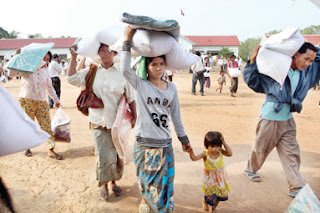 Photo by: Sovan Philong
Cambodian villagers displaced by fighting along the Thai-Cambodian border receive donations of rice and other supplies from the Red Cross in Samrong town, in Oddar Meanchey province yesterday.
During a weekly television programme yesterday, Thai Prime Minister Abhisit Vejjajiva accused Cambodia of deliberately provoking the clashes in order to “internationalise” the dispute.
Thailand has argued that the conflict must be solved bilaterally, and a deal brokered in February that would see teams of Indonesian military observers dispatched on either side of the border has been stalled pending Thai approval.
Thailand “focused only on the military targets” during the clashes, Bangkok’s The Nation newspaper quoted Abhisit as saying. Some 21 kilometres from the border in Banteay Ampil district’s Kokmon commune, however, local officials claimed at least 18 shells had landed in the vicinity of civilian homes on Saturday.
One house in the village had been reduced to a shell after being hit by what officials said was a pair of 155mm Thai rockets.
A mangled satellite dish sat amid a pile of debris in the front yard yesterday morning as RCAF troops pieced through the wreckage, displaying a piece of silver shrapnel as evidence of the attack.
“We have never experienced a war like this and there have never been bombs dropped in this area,” Kokmon Commune Chief Oun Vy said yesterday, adding that no villagers had been injured in the shelling.
“There should not be fighting around here because it’s a civilian area and the people are unarmed.”
Panitan said Thai officials had identified “seven locations” in civilian areas of Thailand that had been hit by Cambodian artillery fire and were in the process of gathering further information.
Observers are on the scene analysing munitions used by Thailand. During the clashes near Preah Vihear in February, Thailand deployed 155mm Dual Purpose Improved Conventional Munitions, a form of cluster bomb. Such weapons scatter bomblets over a wide area – explosives that often lie dormant for decades – and are widely condemned for their devastating effects on civilian populations.
The Cambodian Mine Action Centre deployed personnel in Oddar Meanchey province this weekend to investigate whether Thailand had again used the controversial weapons, though CMAC director general Heng Ratana said yesterday that his organisation had discovered “no sufficient evidence to confirm” that cluster munitions had indeed been used.
Cambodia’s Defence Ministry claimed Saturday that Thailand had used rockets equipped with “poisonous gas”, though Thai Army deputy spokesman Veerachon Sukhondhadpatipak called this accusation “groundless” and Heng Ratana said it had not been verified.
Conventional artillery, however, appears to have been heavily used. Roth Sopheaphal, an RCAF soldier stationed in Banteay Ampil’s Kork Kpos commune, said “nearly 1,000” shells had been exchanged between the two sides since the fighting began on Friday, including roughly 160 yesterday morning.
The Ministry of Defence said in a statement yesterday that during the fighting, Thai troops had “showered gunfire” around Ta Moan temple in an attempt to seize control of the site.
The road to Ta Moan from the Cambodian side winds up a hill that is exposed to fire from Thai positions, Cambodian troops said.
Lab Hak, an ambulance driver from RCAF Brigade 42, said shells had landed both in front of and behind his vehicle yesterday as he sped away from the battlefield.
“It felt a bit shocking to see it just 15 metres in front of the car,” he said.
As of yesterday evening, Roth Sopheaphal said, Thai and Cambodian troops remained stationed around the perimeters of both Ta Maon and Ta Krabey, with neither side having taken control.
Back in Oddar Meanchey’s Samroang town, about 45 kilometres from the border, dozens of evacuees gathered outside the RCAF provincial commanding office to receive rations of 20 kilogrammes of rice, cookware and blankets from the Cambodian Red Cross.
Thun Nol, governor of Oddar Meanchey’s Samroang district, said 18,000 Cambodian civilians had been evacuated from their homes near the border; Uy Sam Ath, director the disaster management department at the Cambodian Red Cross, put the total at 9,867, but called this “an estimation” and said the figure could go up.
Thai spokesman Panitan said roughly 25,000 Thai villagers had been evacuated.
Sitting in the dust outside the RCAF office in Samroang, 53-year-old Nang Pheap said she had fled yesterday morning from her home in Banteay Ampil’s Por Thivong village, about six kilometres from the border.
“I arrived here just a few hours before the clashes started again,” she said.
“Many bombs landed close to my village and we are living in fear.”
ADDITIONAL REPORTING THOMAS MILLER
Posted by CAAI News Media at 11:31 pm

My initial believed was relief plus the second was oh no payday bank how much will this cost me.
He immediately advised me that the value was quite lower compared for the
some others that advertised excellent minimal
costs. One of the most wonderful part was I closed my payday loan today in six
days. I'm so blessed to become locked in at a nice very low fee that I'll by no
means must be concerned about refinancing yet again.