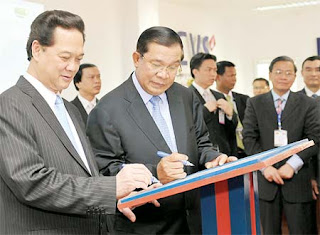 Vietnamese Prime Minster Nguyen Tan Dung (L) and his Cambodian counterpart Hun Sen signing a commemorative board at the inaugural ceremony of the Vietnam-Cambodia Securities Company in Phnom Penh, Cambodia, on April 24 (Photo: SGGP)
http://www.saigon-gpdaily.com.vn/
via CAAI
Monday ,Apr 25,2011, Posted at: 16:00(GMT+7)
Vietnam, Cambodia agree to increase bilateral trade
Vietnam and Cambodia sort to raise the bilateral trade turnover to US$6.5 billion by 2015 during the second Vietnam-Cambodia investment promotion conference in Phnom Penh on April 24.
At the conference, co-chaired by Prime Minister Nguyen Tan Dung and his counterpart Samdech Hun Sen, the two sides discussed ways to further boost bilateral trade and economic cooperation, including the opening and upgrading of several border economic zones and border markets.
The Vietnamese leader praised the outcome of the economic and trade cooperation between the two countries attained after the first conference, describing it as a foundation for the two sides to further cooperate and tap their potential effectively.
PM Dung stressed that the second Vietnam-Cambodia investment promotion conference had an important and necessary significance in the current period, as the event will serve as a channel for regular information exchanges between the two countries and within business circles.
He said Vietnamese enterprises operating in Cambodia should not just care about profit alone but create more jobs and improve social welfare along with preserving a good image of Vietnamese enterprises in Cambodia.
The PM hoped the Cambodian Government would create favorable conditions for Vietnamese enterprises to further boost investments in Cambodia.
Taking the floor, PM Hun Sen underlined the importance and significance of the conference. He believed that the conference would contribute to strengthening the traditional friendship and ties between the two countries.
Vietnam has prioritized selling of power to Cambodia as the country faces a power shortage, he added.
He said that the Cambodian Government is pressing ahead with its fight against corruption and in administrative and legal reforms. Construction, power, mining and the tourism industries are awaiting foreign and Vietnamese investors.
PM Hun Sen said the economic road on which Cambodia is going is similar to the one that Vietnam went on, so this is an advantage for Vietnamese enterprises to make bigger investments in the Cambodian market.
Bilateral trade rising
Over the past years, the friendship and cooperation between Vietnam and Cambodia has deepened.
The two countries have signed over 60 legal documents for bilateral cooperation in almost all fields and created necessary cooperative mechanisms to fit their current development requirements.
As a result, economic and trade ties between the two countries have grown steadily. The two-way trade has risen year on year, from US$950 million in 2006 to over US$1.8 billion in 2010.
According to the Ministry of Planning and Investment, the number of Vietnamese investment projects in Cambodia increased from 57 in December 2009 to 87, with a combined capital of over US$2 billion in April 2011.
These projects are mostly in telecommunications, aviation, agriculture, rubber plantations, energy, hydropower, mining and banking and they have created stable jobs for over 6,000 Cambodian workers.
Cambodia is ranked second amongst 55 countries and territories where Vietnam has investment projects and Vietnam is ranked third amongst foreign investors in Cambodia.
Vietnam beat South Korea to head the list of countries with the most visitors going to Cambodia with 316,000 Vietnamese visitors going to the country in 2009.
The number soared by 18 percent to over 460,000 in 2010.
At the end of the conference, the two PMs witnessed the signing of seven cooperation agreements and memorandum of understanding for investment promotion and management between ministries and enterprises of the two countries, of a total value of nearly US$1 billion.
They also witnessed the hand-over of investment licenses to the Lower Se San 2 hydropower project and the iron ore mining project between the Vietnamese Ministry of Industry and Trade and the Cambodian Ministry of Industry, Energy and Mining.
Earlier, the two PMs cut the ribbon to launch the Vietnam-Cambodia Securities Company, the first Vietnamese securities company licensed to implement all securities operations in Cambodia, with a chartered capital of US$10 million.
Sources: SGGP, VNA - Compiled by Hoang Chuong
Posted by CAAI News Media at 11:54 pm