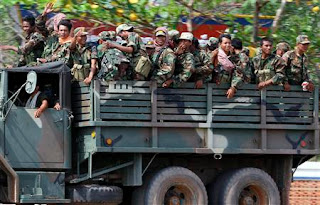 Cambodian soldiers gesture as they ride a truck in Oddar Meanchey province, 20 km (12 miles) from the Cambodia-Thai border April 25, 2011. REUTERS/Stringer
http://www.swissinfo.ch/
via CAAI


By Martin Petty
PHANOM DONG RAK, Thailand (Reuters) - Thailand's foreign minister called Monday for one-on-one talks with Cambodia after three days of jungle clashes that killed at least 12 people and sent thousands into evacuation centres in the bloodiest border conflict in nearly two decades.
Thailand's renewed push for bilateral talks followed the cancellation of a visit to both countries by a top Southeast Asian envoy who brokered a U.N.-backed peace deal on February 22 to send Indonesian military observers to the border.
Thailand has resisted international observers, but Thai Foreign Minister Kasit Piromya declined to rule them out when speaking to reporters at an evacuation camp.
"It's not something we are opposed to. This is a sensitive issue," he said in a briefing about 30 km (19 miles) from the scene of recent fighting.
The fighting near two disputed 12th-century Hindu temples followed a four-day clash in February that claimed 11 lives near Preah Vihear, a temple about 150 km (90 miles) to the east.
Guns were mostly silent Monday but Thai fighter jets roared over the area.
At the centre of the latest dispute are the Ta Moan and Ta Krabey Hindu temples in a heavily mined jungle area claimed by both sides. Thailand says the ancient ruins are in its Surin province but Cambodia insists they fall in its territory.
Fighting has been heaviest around Ta Moan, a complex that contains three temples nestled into a mountain pass. Both sides are also positioned around Ta Krabey, where fighting first erupted Friday and where Cambodia has been accused of building military bases.
A clash late Sunday killed a Thai soldier, bringing the death toll since Friday to five killed and 31 wounded. Cambodian authorities said a Thai sniper shot dead a Cambodian soldier early Monday, bring its death toll to seven with 17 wounded.
The Cambodian Defence Ministry said Thai shelling had "damaged the temples," without elaborating, and that civilian villages had been shelled about 20 km (12 miles) inside Cambodian territory. About 17,000 people had been evacuated, it said, and a school and 10 houses destroyed.
Cambodian government spokesman Phay Siphan said "some Thai nationals" were taken into custody for "spying."
He did not provide details.
SETBACK TO ASEAN
Indonesian Foreign Minister Marty Natalegawa, chair of the Association of South East Asian Nations (ASEAN), of which Thailand and Cambodia are members, had been expected to visit Thailand and Cambodia separately Monday.
Although his trip was cancelled, Natalegawa told reporters in Jakarta a trilateral meeting could still take place.
"The possibility is not closed for a direct meeting among the three of us, but the date has not been decided. The important thing is that communication continues," he said.
The conflict and fierce rhetoric from both sides has been a setback for ASEAN, a 10-member bloc modelled on the European Union that plans to become a regional community by 2015.
"Thailand and Cambodia have to show that they really want to promote diplomacy and not violence," said Indonesian President Susilo Bambang Yuhoyono.
U.N. Secretary-General Ban Ki-moon has urged "serious dialogue" to produce an "effective and verifiable" cease-fire.
Although on the surface the renewed fighting appears to be a dispute over sovereignty, many experts are sceptical and suggest either government may have started the clashes to discredit the other or to appeal to nationalists at home.
The conflict could boost support for Thai Prime Minister Abhisit Vejjajiva's government ahead of an election due by July. Cambodia's government, which has had a series of bitter quarrels with Abhisit's administration, could stand to gain if his ruling Democrat Party is voted out of office.
The two sides battled for more than three hours from late Sunday morning and pounded each other with mortars and artillery, sending hundreds of villagers fleeing or into hiding in makeshift bomb shelters.
Ban Nongkana, a village 7 km (4 miles) from Ta Moan, was almost deserted Monday after three days of shelling. Dogs roamed dirt tracks and rustic wooden houses were abandoned after troops urged people to leave, fearing another escalation.
Thai Foreign Ministry spokesman Thani Thongpakdi said 30,000 Thais were evacuated from border areas.
The dispute over jurisdiction has persisted since the 1950s, when colonial power France pulled out of Cambodia.
"Without a third-party observer, we will just point fingers at each other about who fired first," Cambodian Foreign Ministry spokesman Koy Kuong said.
An international court ruling awarded Preah Vihear to Cambodia in 1962, but Thailand has tried to thwart its attempt to list the temple as a UNESCO World Heritage Site because it still lays claim to the 4.6 sq km (1.8 sq miles) of scrub around it.
(Additional reporting by Prak Chan Thul in Phnom Penh, Ambika Ahuja in Bangkok and Telly Nathalia in Jakarta; Editing by Jason Szep and Alex Richardson)
Reuters
Posted by CAAI News Media at 11:57 pm