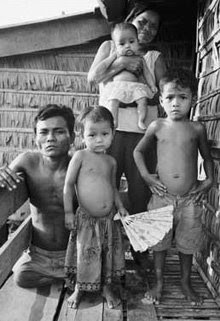 The war victims in Cambodia

The Cambodian government asked in 1997 the UN for help to establish a war crimes tribunal, which should bring to trial the perpetrators that dragged Cambodia through unspeakable horrors in the late 70s. Today, after 10 years of negotiations and several attempts of sabotage towards the tribunal, the Cambodian people are closer to see at least some form of justice than ever.

But it did not look good until only 14 days ago. November 2006, the tribunal was caught in a deadlock over the internal rules. UN said they would not let the tribunal proceed without an agreement on these rules and thus, over the past 7 months, there have been hard negotiations and several failed attempts to reach a solution.

But June 14, the judges agreed upon the wording of every single one of the hundreds of internal rules after having discussed them for a fortnight.

The biggest challenge has been to secure the rights of the defendants. The defense refused to compromise on several rights, including the right to choose a team of lawyers, to remain silent, to be considered innocent until convicted and be trialed within a reasonable timeframe. The prosecutors decided to accept those non-negotiable rules.

- We could not have hoped for a better result. Apart from the defense, there have been very few disagreements during the meeting. They even had time to discuss beyond the agenda, says Peter Foster, UN spokesperson for the KR Tribunal. He adds that there is at least one case ready to be handed over from the prosecutors.

The first case is very likely to be Duch, the former leader of Tuol Sleng, the notorious torture prison where none but a handful of the 17,000 prisoners survived. However, nothing is public yet.

DanChurchAid's collaboration partner, human rights organization Adhoc is one of the biggest local contributors to the Extraordinary Chambers of the Courts of Cambodia, the formal name of the trials. But they are also one of the critics. Director Thun Saray says he is satisfied with the rules — for now.

- In general, the rules are ok. It seems like the judges have listened to the advice from the international experts and the NGOs, he says. But he points out, though, that there is a very tight budget for witness protection and that might be a problem later.

- We are contempt for now. But we will need to monitor the status of the budget for witness protection, because as it is now, there is not money enough for that, he says.

The ECCC expects to start the prosecution of the defendants in the end of 2007 or beginning of 2008, according to Peter Foster.

The Khmer Rouge, lead by Brother Number 1, Pol Pot, controlled Cambodia in between 1975-1979. During those years, the regime attempted to convert Cambodia into a one class society by idealizing the worker and have the entire population farming rice in the provinces. During that experiment, about two million civilian Cambodians were either murdered or died from hunger, disease or the hard labor in the field.
Posted by CAAI News Media at 6:01 am