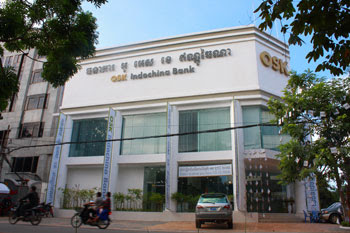 Photo by: HENG CHIVOAN
OSK bank’s first location in Cambodia was opened this week. Even with analysts divided on the impact that the global financial crisis will have on the local banking system, OSK says it has sufficient resources to expand in the local
The Phnom Penh Post

Written by May Kunmakara
Thursday, 23 October 2008

"We are definitely looking into this market and hope to introduce [Islamic banking] services in one year," said Lim.

Islamic banking is a banking system that conforms with the principle of Shariah law, including a prohibition on interest-based loans, and has seen growing interest in Islamic countries.

Othsman Hassan, secretary of state at the Ministry of Labour and Vocational Training, said OSK's plans would offers Muslims in Cambodia an opportunity to obtain loans and to capitalise on the Kingdom's rapid economic growth.

Most of Cambodia's Cham Muslims live outside of Phnom Penh and have little experience with the traditional banking sector.

"I hope that the bank will give an opportunity for Islamic people to obtain loans in order to improve their businesses and standards of living, and to benefit from the growing local economy," Othsman Hassan said.

" The banking system in malaysia is resilient.... we are confident. "

With global finances in tatters and Cambodia's economic boom running out of steam, evidenced by expectations of slowing growth over the next two years, OSK is entering Cambodia in troubled times.

Once one of the darlings of local investors, Cambodia's banks are now threatened by declining foreign capital, increased restrictions on local lending and falling consumer spending.

"Although the global financial crisis is spreading and Cambodia is confronting the border issue with Thailand, we are looking for long-term investment," Nik Mohamed said.

Most of Cambodia's banks rely on foreign capital to stay afloat, but OSK says its Malaysian ties are strong.

OSK, a 40-year-old company, is 100 percent owned by OSK Holding Berhad, which is listed in Malaysia.

"The banking system in Malaysia is resilient.... We are confident that our partner has sufficient resources," Lim said, adding that the company plans to soon expand.

According to Nik Mohamed, OSK "will expand to more branches in a few months to draw more customers".

"We also plan to list on the stock market when it launches," he added.

"The double-digit GDP growth in Cambodia means that all sectors are in need of financing - there are many opportunities for banks."

Tal Nay Im, director general of the National Bank of Cambodia, said OSK is the third Malaysian bank to open in Cambodia after Cambodian Public bank and May Bank.

"OSK Indochina reflects the increasing confidence among local and foreign investors in the Cambodian banking system," she said.

"I hope that OSK will cooperate with other banks and financial institutions to assure the prosperity of business operations in Cambodia."

"The bank is here to grow with the country and with people's growing need for financial services and products," he said.

The bank currently employs 29 staff in Cambodia, but will likely increase, officials said.

The total paid-up capital is US$13 million.

In Malaysia, OSK operates 2,500 stalls at 50 locations, according to news reports.