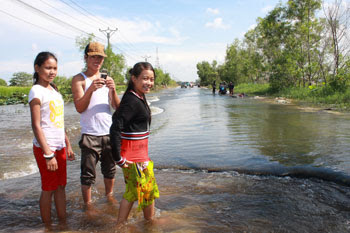 RESIDENTS of Phnom Penh's Russey Keo district, whose homes repeatedly flood following development there by the municipality, are threatening to protest if the authorities fail to drain the area by the beginning of next month.

Vath Chamnan, 35, a resident of Phnom Penh's Thmey commune, said the residents from his village have agreed to collect thumbprints on a compensation demand that they are planning to submit to City Hall.

"We will collect the thumbprints of all those who have had their homes flooded by the development plan if the government continues flooding our village," Vath Chamnan said.

He added that all affected residents from the Russey Keo district will have an opportunity to thumbprint the compensation demand.

The children from the district cannot attend school as it has been flooded, and the residents are getting skin infections from walking in the polluted water, he said.

"The children will soon be at risk of cholera and dengue fever," he added. Mei Vicheth, a resident of Boeung Chhouk village in the area, has labeled Phnom Penh's development plan "a ruin the city plan" and said that villagers were very angry with the capitals governor, Kep Chuktema.

"Phnom Penh's governor claims he is developing Phnom Penh to attract tourists, but he is pumping sand to fill in drainage ponds and this is causing pollution and floods," Mei Vicheth said.

" Authorities should be liable for this flood and provide materials and food . "

Sok Sambath, chief of Kilometre No 6 commune and a former Sam Rainsy Party activist who defected to the Cambodian People's Party before the July elections, said he disapproves of the filling in of the drainage ponds in his commune.

"The governor of Russey Keo district and the governor of Phnom Penh approved this to develop a factory and modern buildings," he said.

"Now 70 percent of people's homes and many newly constructed roads have been flooded by the landfill."

CPP lawmaker Cheam Yeap agreed, saying "Phnom Penh authorities should be liable for this flood and provide materials and food for the villagers".

"They must have a drainage system ready before embarking on any development," he said. Thun Saray, president of Adhoc, said the authorities should rethink their master development plan because many Phnom Penh roads have no drainage system and the city will inevitably flood.

Kep Chuktema, the governor of Phnom Penh, said that City Hall was unable to pump out the water from the flooded areas as it was simply a seasonal deluge.
Posted by CAAI News Media at 7:28 am