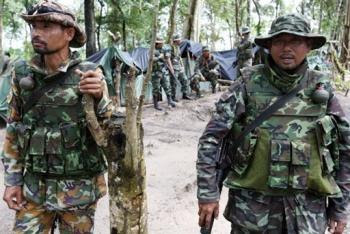 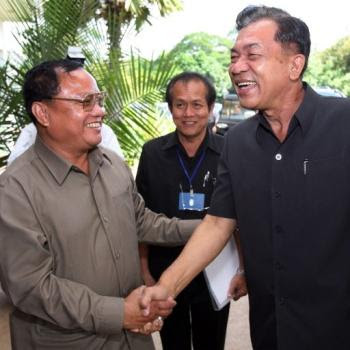 The meeting between the mid-level officials in Cambodia's northwestern tourist hub Siem Reap is meant to pave the way for talks between senior military commanders on Friday.

The talks are aimed at calming a simmering territorial dispute over land near the ancient Preah Vihear temple, which broke into a firefight that killed one Thai and three Cambodian soldiers on October 15.

General Neang Phat, secretary of state at Cambodia's defence ministry, told reporters that he thought commanders would reach an agreement to reduce the number of soldiers deployed in disputed territory.

"We will also talk about how to avoid military confrontation and to continue redeploying the troops," he said.

Cambodian Prime Minister Hun Sen and Thai Premier Somchai Wongsawat are also scheduled to hold talks in Beijing on Friday on the sidelines of a meeting between leaders of Asian and European nations.

Somchai told reporters on Thursday that peace should be restored between the neighbours "as soon as possible".

"My meeting with Hun Sen is on the basis that we are close neighbouring countries that can never separate. We will have a good and amicable relationship with each other," Somchai said.

"If there is a problem, we will solve it with peaceful measures... If something needs to be done, we must do it to bring peace and order back as soon as possible," he added.

Cambodian and Thai military officials agreed to joint border patrols the day after last week's clashes between soldiers stationed on disputed land near the temple, which belongs to Cambodia.

But Cambodian commanders have since reneged on the deal, saying such patrols are not possible in disputed areas.