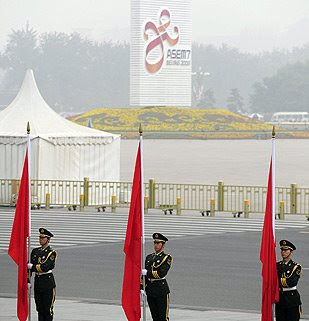 Leaders from Europe and Asia have begun gathering in China for a meeting set to be dominated by talks on measures to counter the global financial crisis.

The biennial Asem summit in Beijing which opens on Friday will discuss a French plan for global regulation of the financial industry.

Nicolas Sarkozy, the French president, is expected to seek backing from the 45-member grouping for his bid to radically restructure the Western-dominated global financial system.

He wants the emerging giant economies of China and India to have a bigger role in the world's economic decision-making.

The two-day meeting which starts on Friday includes the heads of 45 member states who together account for almost two-thirds of the world's gross domestic product.

The meeting comes amid hopes that China's economy may remain robust enough to play a key role in limiting the damage from the crisis.

According to the International Monetary Fund, China is now the largest contributor to global growth. Even with the latest data showing its economy slowing down, it is still expected to expand by 11 per cent this year.

Speaking to reporters ahead of the summit, Xi Jingpin, China's vice president, said the Chinese government was "paying very close attention and evaluating the efforts and measures we can all make to maintain stability".

On Wednesday Tony Fratto, a White House spokesman, said it was "critically important" for leaders attending the Beijing summit to make concrete commitments to deal with the current financial crisis.

"I hope this summit will have the chance to raise some ideas, and consider some options," he said.

"I hope China will play a stabilising role."

The two-day summit meanwhile could be overshadowed by Chinese anger at a jailed dissident being shortlisted for an EU human rights prize.

Hu Jia has been named as one of three activists being considered for the European Parliament's Sakharov Prize, prompting Beijing to issue a warning that ties could be seriously damaged if he won.

China has already expressed "much regret" to EU officials over the nomination.

Hu, a high-profile rights campaigner known for criticising the government in internet articles and in interviews with the foreign media, was jailed for "incitement to subvert state power".

In a letter to the European Parliament president, Song Zhe, China's ambassador to the EU, said EU-China ties were just recovering from the angry backlash in China triggered by European human rights protests ahead of the Beijing Olympics.

"If the European Parliament should award this prize to Hu Jia, that would inevitably hurt the Chinese people once again and bring serious damage to China-EU relations," Song wrote.

"Not recognising China's progress in human rights and insisting on confrontation will only deepen the misunderstanding between the two sides," he cautioned.

A prominent member of the European Parliament said the Chinese threat was counter-productive.

"Heavy-handed Chinese state lobbying to influence the outcome of the Sakharov prize winner only plays into the hands of critics and reinforces the case for Hu Jia," Graham Watson, the leader of the EU Liberal group, said.
Posted by CAAI News Media at 10:12 pm