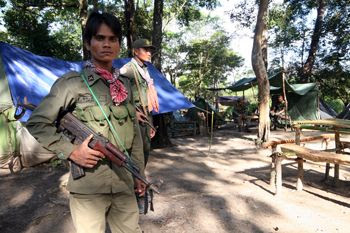 Photo by: TRACEY SHELTON
Cambodian soldiers (foreground and under blue tarp) and Thai soldiers (rear under green tarp) in Preah Vihear in a file photo.
The Phnom Penh Post

Soldiers at Preah Vihear say standoff continues in spite of dialogue between Cambodia and Thailand.

DESPITE continued dialogue Monday between Cambodia and Thailand's foreign ministers in Phnom Penh, commanders on the border say the military standoff there - now in its seventh month - continues to drag on.

"Nothing has changed," Srey Doek, commander of Military Division 3, said Tuesday. "Our soldiers are standing in the same place as before."

Tensions along the border were further complicated on Monday when a Thai solider was severely injured in a land mine accident around 200 metres from the Cambodian front lines, Neak Vong, deputy commander of Brigade 42, told the Post.

The injury prompted Thai soldiers to shoot into the air in a bid to signal to superiors what had happened. Cambodian soldiers, unaware of the accident, went on red alert after hearing the shots, Neak Vong said.

He added that Thai soldiers had been on patrol when the incident happened.

"There are many mines in this area because it was a battlefield in the 1980s and 1990s. We know, and Thai soldiers also know, the area is full of mines, but they still violate [our territory on their patrols]," Neak Vong said.

He said that five soldiers in civilian uniforms from each side continue to standoff at the contested Ta Moan Thom temple in Oddar Meanchey province.

Troubles began on the border in July when Unesco listed the Preah Vihear temple as a World Heritage site.

Soldiers on both sides were killed and wounded when firefights broke out in October, but since then fighting has stopped, with both sides saying they are committed to dialogue in a bid to reduce the military buildup along the border.
Posted by CAAI News Media at 11:27 pm