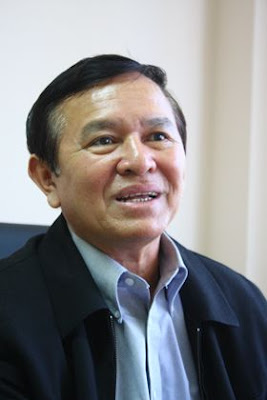 HRP president denies that he solicited advice from Hun Sen before creating party as well as his alleged reliance on foreign donors.

PRIME Minister Hun Sen's statement last week that he had supported the creation of the Human Rights Party in 2007 was misleading, Kem Sokha, the president of the party, said in an interview Tuesday with the Post.

During a speech at an inauguration ceremony in Oddar Meanchey province last week, Hun Sen said he had advised Kem Sokha on his initial plans to form the party and also provided a stadium location in which he could hold the party's first congress.

But Kem Sokha said Hun Sen has never supported opposition parties and has instead actively tried to thwart their progress.

"I don't care what he said," Kem Sokha told the Post.

"He does not want to have democracy. He wants to destroy the democratic movement. He has never said anything good about us."

Before the party was created in January 2007, Hun Sen said, Kem Sokha needed advice. He added that Kem Sokha said he could not create a party right away because he did not have enough money. At the time, he planned to visit the US to solicit donations, Hun Sen said.

In response, Kem Sokha said he did not go to Hun Sen for advice, insisting that he was obligated to inform Hun Sen of his plans because Hun Sen is the prime minister. Moreover, he claimed Hun Sen was obligated to approve the creation of the party and that this did not amount to actual support for it.

"It is just his duty, and it is my duty to ask him," Kem Sokha said.

Without Hun Sen's approval, Kem Sokha said, the Human Rights Party's 30,000 members would not have been allowed to legally attend the party's first congress, which was held in July 2007.

Kem Sokha also took issue with Hun Sen's characterisation of the party's fundraising tactics. At the speech in Oddar Meanchey province, Hun Sen said of Kem Sokha: "He is a beggar of foreign money."

Hun Sen said this made Kem Sokha a hypocrite given that he has repeatedly criticised Hun Sen's interactions with foreign donors.

Hun Sen also said Kem Sokha at first asked him whether he should create an NGO or a political party, a charge Kem Sokha flatly denied.
Posted by CAAI News Media at 11:34 pm