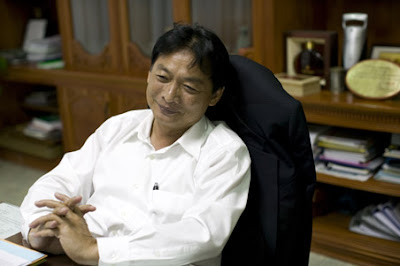 The small scale of pig farms, high pig-food prices, the often steep fees charged by slaughterhouses, smuggling of pigs from Vietnam undermining competition or the prices of pork meat, volatile and unpredictable as a consequence. Reasons for the weakness in the Cambodian pig industry are aplenty, as the country currently has to import the majority of pigs intended for domestic consumption. Mong Reththy, the Cambodian food industry tycoon, also a Senator affiliated to the prime Minister's CPP, aims at shifting the balance. For this process, he initiated an ambitious pig breeding project, the first specimen of which come straight from England.

The first requirement was to build a vast farming complex, which oknha Mong Reththy presents as modern and in accordance with international standards (we were not allowed to visit it for health and safety reasons), established on a 30ha piece of land he owns on the provincial border between Preah Sihanouk and Koh Kong, next to his palm oil plantation. The second thing was to gradually fill the premises with quality breeding pigs, which he found in England following the settling of a deal with an English commercial partner, the ACMC company. At the end of December 2008, 150 animals arrived in Cambodia. This first shipment will be followed by another at the end of January (300 pigs), and a final one with 150 animals a month later.

With this 600-head porcine livestock, the businessman, also vice-president of the Phnom Penh Chamber of Commerce, did the maths and gave his predictions – by the end of the company's second year of activity, there will be a total of 6,200 pigs on the farm, and by the end of the third one, it should host 18,000... And in eight years' time, a million animals, i.e. the limit set by Mong Reththy, a limit which should be maintained and, according to the businessman, will satisfy 50% of domestic demand. For the first year of exploitation, investments amount to USD5 million, and should reach USD130 million in the tenth year.

“Some wonder: 'Why import pigs for this farm?' This is because there are not enough of them in farms in the country. Satisfying the needs of the country requires 2.4 million animals per year. Phnom Penh alone almost consumes 2,000 pigs every day!”, Mong Reththy explains, stressing that local farming is faced with higher costs than those found in neighbouring countries. “Pork sells at 1.80 to 2 dollars per kilo, when it's only 1.3 dollar per kilo in Thailand. Therefore, sellers prefer importing!”

For his breeding pigs imported from Yorkshire, Mong Reththy spend USD3,000 per sow and USD4,000 per boar - and this is without transportation expenses - when a pig imported from Thailand costs USD300. This is down to a difference in size, he points out. Sows from Thailand only give birth once, whereas the breed he chose to import can reproduce 4 years in a row.

His huge farm in south Cambodia will only employ some fifty people, but in fact, will give a job to many more, according to Mong Reththy, who heads an important company named after him. First, he will meet farmers to buy products needed to feed pigs, as feeding represent ¾ of all expenses in pig breeding. Regarding this issue, he digressed on the nonsense of exporting unhusked rice: In Cambodia, if growers sold husked rice, in addition to the value-added they would give to their product, they could also make business with rice-bran, which is part of pigs' diet.

Then, pigs will be sold to local farmers, either professional or inexperienced, provided they accept to attend a short training session on pig breeding at his farm (the techniques used were introduced by the ACMC company) and sell adult pigs to his slaughterhouse. Already, he makes the promise that pork meat prices coming from his slaughterhouse will be brought into line with prices charged in Thailand, in order to reduce the volume of import.

Putting an end to importations in the long run

Mong Reththy boasts about his being the only one daring to embark on such enterprises, seen as risky. “Banks do not lend money to the farming sector in Cambodia, it is seen as high-risk. But look, we thought that the property sector was more viable, and today it is experiencing crisis! In the end, I had to use my own personal funds.”

The importation of pigs is currently split between five companies in Cambodia. Two months ago, Mong Reththy obtained the assurance that the imported pigs would be examined by his own veterinaries on the outskirts of Phnom Penh, so as to prevent the potential introduction of contagious diseases such as the foot and mouth disease, and make sure that importation papers are in order. But do these companies show worry in front of the arrival on the market of this massive entrepreneur? Mong Reththy says he contacted their representatives via the Ministry of Agriculture to explain his project. Since then, the market has been regulated and each company was granted a maximum quota of imported pigs, with an overall limit coming altogether to an equivalent of 800 animals per day.

“I do not want any misunderstanding here. I am doing this to relieve them, not to make their companies die...” And when his entrepreneurial approach sparks off discontent , the head of Mong Reththy Group reminds that the renovation of road 271 by his company, which surrounds the south-west area of Phnom Penh, generated much opposition. Back then, roadworks had forced inhabitants to cut part of their houses and even to move house, and disturbed road traffic. “Today, we have a nice road and residents understood the interest of the works, and they thank me...”

In the long run, Mong Reththy's goal is to export Cambodian pork meat, which would require the opening of another large-scale breeding farm in the country. Would Mong Reththy be ready to invest in a second farm? “We will see, it all depends on financial matters. But if a bank comes to back me up, then why not?”. He noted that Maybank showed a certain interest in his project. The investor would like to see this support turned into subventions for his company.

Regulation of the market

The pig import company Tho Kim Sreang have worked with Thailand since 2003. Its representative, Yuok Rothmony, chose that activity after noticing the failure of pig industry in Cambodia, burdened by excessive pig food prices. “The day Cambodia stops importing pigs, if local demand is fully satisfied, then it will not be a problem for me. It is the open-market policy”, the representative says, content with his situation.

Yuok Rothmony confirms the enforcement of a quota policy a few months ago by the Ministry of Agriculture. His company was granted the right to import 203 animals per day, when the average was 250 before the policy was enforced. However, not unpleased with the quotas, he claims he is rather happy that the market is now regulated and that pig import companies are not subject to illegal competition any more.

The fifth and latest pig import company to date, Oud Cambodia, benefited from a quota of 150 heads per day and claims not to be aware of Mong Reththy's project.

Yang Saing Koma, president of the CEDAC (The Cambodian Centre for Study and Development in Agriculture) acknowledges that techniques and mindsets in the agricultural sector need a revolutionary change. “If Cambodia imports that many farming products, it is because firstly, there is a problem with local competences, they are insufficient. The majority of farmers practise family agriculture intended for their own subsistence and do not think about marketing their produce. Little by little, often with some stimulus initiated by NGOs involved in agricultural and development issues, some realise that there are a few seizable opportunities. Then, the problem of final products adds up: their cost price is higher than that of imported products. And yet another issue: the fact that farmers are faced with a lack of finances. They do not have a basic capital and generally cannot get any help for investment.”

As for Mong Reththy's project, he sees in it “a good investment, which will bring income to the state”. However, he warns against the risk that English pigs might not stand the tropical climate and local food. But this breed of pigs, reportedly genetically-advanced, should be looked after in the best possible way, Mong Reththy says.
Posted by CAAI News Media at 1:23 am