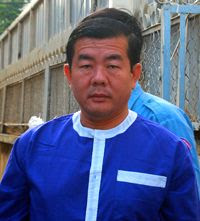 Photo by: HENG CHIVOAN
Heng Pov, shown here in a file photo, is serving a sentence of 58 years in prison.
The Phnom Penh Post

A TRIAL of already-incarcerated former Phnom Penh police chief Heng Pov on charges of illegal detention and interrogation has been suspended, with the court and Heng Pov's defence lawyer citing conflicting reasons for the delay.

Heng Pov, who while in power was much-feared in his role, is currently serving a total of 58 years in prison for a battery of charges including murder, counterfeiting, extortion and kidnapping.

Choun Sunleng, deputy president of the Municipal Court of Appeal, said following Monday's hearing that Ly Rasy, the former chairman of Phnom Penh's Criminal Bureau, who is accused of aiding and abetting Heng Pov, has refused legal assistance, which is counter to court rules.

"It's a criminal case, so both of them are required to have lawyers. I requested that Ly Rasy accept Kao Soupha [Heng Pov's lawyer], but he refused it," Choun Sunleng said Monday after Heng Pov and Ly Rasy were returned from the court to Prey Sar prison.

He expected that the matter would be resolved soon so that the trial could commence next month. Lawyer Kao Sopha denied the court's explanation and told the Post Monday that the hearing was suspended because the court forgot to inform Ly Rasy's lawyer that the hearing would be held Monday.

In addition to the case due to have been addressed Monday, Heng Pov faces outstanding charges carrying sentences of up to 30 years for the attempted murder of National Military Police head Sao Sokha and Koh Santepheap publisher Thong Uy Pang.

Still popular with some

Long Phoeun, an official at the Appeal Court, said more than 60 residents from Kampong Speu waited Monday outside the Ministry of Justice, where the hearing took place, to call for the release of the former police chief. In 1996, Heng Pov presided over a police crackdown on armed robbery in the province, ingratiating himself with local residents.

The former municipal police chief, who was arrested in Malaysia in 2006 after a six-month bid for political asylum, blames late National Police Commissioner Hok Lundy for the crimes that he has been charged and convicted over so far.

Heng Pov has also pleaded with authorities to unfreeze his assets - including a house in Chroy Changvar and nearly US$1 million - confiscated by authorities after his arrest in 2006, arguing that his children are living in poverty.
Posted by CAAI News Media at 12:41 am