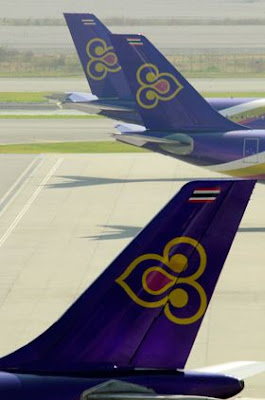 CAMBODIAN airport traffic dropped more than three percent last year compared with 2007, while the Kingdom has seen traffic grow by 135 percent in the past four years, said the French company that operates the country's air terminals, Societe Concessionnaire des Aeroports (SCA), in its annual report.

While traffic through Phnom Penh International Airport increased slightly from 1.6 million passengers in 2007 to 1.69 million in 2008, representing 5.6 percent growth, numbers to Siem Reap International Airport fell from 1.73 million to 1.53 million over the same period, a decrease of 11.6 percent. Overall this meant air traffic dropped by 110,000 passengers in 2008 over the previous 12 months, said the report, while Phnom Penh air traffic overtook that through Siem Reap.

Siem Reap saw an even sharper drop in numbers at the end of 2008 - traffic fell 15 percent in October, 22 percent in November and 26 percent in December over the same months in 2007.

"Passenger traffic is susceptible to decline if our airports remain small," said Eng Sour Sdey, undersecretary of state for the State Secretariat of Civil Aviation, adding that Cambodia needed to expand its airports for intercontinental flights.

"If we can see flights directly from Berlin, Switzerland and other European destinations [such as] ... Germany or London, [passenger numbers] will automatically increase, as long as our airports are big enough for landing and takeoff," he said.

As for the potential to become a regional hub, the country's two international airports would need to handle long-distance aircraft such as the Boeing 747 and Airbus 380-330, Eng Sour Sdey added, calling on the SCA to add the required infrastructure. Currently all Cambodian flights go through other hubs, particularly Bangkok.

Passenger traffic is susceptible to decline if our airports remain small

Ho Vandy, co-chair of the Tourism Working Group, said the government should give a green light to SCA to work closely with the aviation authority to devise a strategy to increase air traffic through Cambodia, adding that the Cambodia Association of Travel Agents and Hotel and Restaurant Association should work alongside airlines to help the tourism industry tackle the current downturn.

Cambodia has yet to open its international airport on the southern coast, which would add more capacity, but Ho Vandy noted: "I was told that Kang Keng [Sihanoukville International] Airport had been planned as the Kingdom's largest airport, but I have no clue what is going on now."