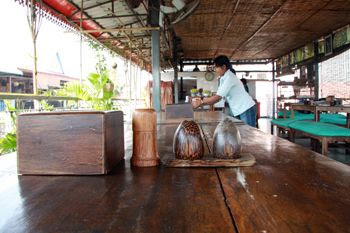 Founded in Italy in 1986, the slow food movement has grown in response to the rise of fast food and fast living. In two decades, the movement has blossomed into a global network of people, organisations, businesses and whole cities supporting the concept of eco-gastronomy - the recognition of the strong connection between the plate and the planet.

Starting at the table, the movement promotes an unhurried way of life founded on the idea that everyone has a right to culinary pleasure but that everyone must also take responsibility to protect the heritage of food, tradition and culture that make this celebration of the senses possible.

"The idea of slow food is very challenging in many ways," said Manuel J Garcia, owner and manager of the chain of Boddhi Tree restaurants and guesthouses in Phnom Penh. "It tests our rigid concept of how we approach things, of living in the fast lane."

Some six months ago, Boddhi Tree, with its three establishments, became one of the first businesses in Cambodia to join the slow food movement.

"Ever since its beginning, the Boddhi Tree restaurant has been very much into the healthy side of cooking. We are concerned about how we get our produce, and how that is linked to development more generally," Garcia said. "It's about looking at the whole picture of why we're in the hospitality industry, why we provide food for customers and where that food comes from. I think most of our customers understand and appreciate the values associated with slow food."

The idea of slow food ... tests our rigid concept of how we approach things, of living in the fast lane.

While Garcia suspects Boddhi Tree is the only member of the movement in Cambodia, he is keen to create an expanding network of businesses that use organic produce.

"The organic market here is unstructured, so the idea is for us to be the centrepoint for others who are entering the business. We are now working on building links between suppliers and buyers," Garcia said.

Going organic
Garcia explained how there has been talk - even at the government level - of taking advantage of Cambodia's relatively clean soil and jumping into organic agriculture.

"They found that the land in Cambodia hasn't been exposed to chemicals or pesticides, mainly due to 30 years of war," he said. "And really, the quality of the produce in Cambodia is just exquisite - much higher than in the rest of the region."
The level of organic production in the Kingdom is, however, still difficult to measure.

According to Garcia, Phnom Penh has a few stable suppliers, such as the Farmers Association, along with several small household producers who grow fruit and vegetables organically but do not necessarily know how to promote their crops.

"At Boddhi Tree, we currently get deliveries twice or three times a week from the Farmers Association, but if we could identify the independent producers, we could also buy directly from them," Garcia said.

Nature & Sea, another Phnom Penh restaurant that markets itself as encouraging healthy food and promoting consumer consciousness, also buys its organic foodstuffs from the Farmers' Association.

"If [the association doesn't] have what we need, though, we will buy it from the supermarket," manager Seng Phalla said. "Key for us is that we serve quality, clean food to our customers."

Consumer choice
At the moment, most customers of both the Boddhi Tree and Nature & Sea are either foreign tourists or expats.
"We sometimes have Khmer customers, but many Khmers don't understand about organic produce," Seng Phalla said. "Foreigners, on the other hand, have already come to value organic."

Garcia similarly admitted that nearly all of Boddhi Tree's patrons are from overseas, though he surmised that there might be a small group of wealthier middle-class Cambodians ready to embrace the concept of slow food.

Chamroen Ouch and Dara Dy, who were enjoying lunch at locally run Khmer Village Restaurant that serves organic and local produce, seem to belong to that group.

"In my family, we are very conscious of what we eat. Organic food is good for the health and tastes better," Chamroen Ouch said. "I think there is an increased understanding of the benefits of organic food among Cambodians."

While many young Cambodians living in the capital are eagerly embracing the concept of fast food, often regarded as espousing values quite opposite to eco-gastronomy, Garcia is nevertheless conciliatory.

"I don't think the rise of fast food in Cambodia is a threat at all. There is space in the market for all kinds of business enterprises. It's great to have fast food around one corner and slow food around the other. I have nothing against it."

More information on the slow food movement is available at www.slowfood.com
Posted by CAAI News Media at 9:06 pm