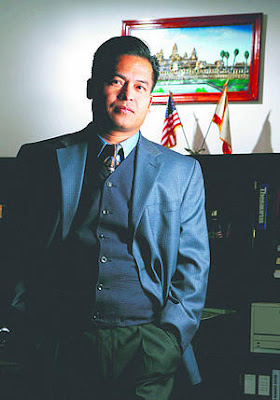 Rodrigo Peña / The Press-Enterprise
Rasmey Sam founded the San Bernardino center in 1995 because there was no place for Inland Asian immigrants to turn for help in their own languages, and in the context of their own cultures, he said.
San Bernardino County

Thirty years ago, Rasmey Sam was a young Khmer Rouge follower who had been brainwashed with the ideology that led the Cambodian government to murder an estimated 1.7 million of its citizens. He was taught to hate his parents and others with "contaminated" ideas.

Today, Sam leads the Asian-American Resource Center, the Inland area's only comprehensive organization for Asian immigrants. He devotes his life to helping immigrants instead of learning why to despise fellow Cambodians.

But the Asian population here is not as concentrated as in parts of Orange and Los Angeles counties, where some cities are half or two-thirds Asian. That can make it more difficult to reach potential clients, Sam said.

Sam founded the San Bernardino center in 1995 because there was no place for Inland Asian immigrants to turn for help in their own languages, and in the context of their own cultures.

Employees speak Vietnamese, Korean, Cambodian, Mandarin and Cantonese. One speaks Spanish. Many of the more than 5,000 clients are Latin American immigrants.

Clients take English and citizenship classes, get documents translated, learn how to use computers, and receive information on low-income utility programs. Seniors enjoy Vietnamese lunches and learn about nutrition, and young people get help with their homework.

The group opened a satellite office in Rubidoux in 2003.

Sam earned a degree in business administration from Cal State San Bernardino in 1995 and quickly began researching how to start a nonprofit organization. One of his marketing professors, Victoria Seitz, helped him.

"He's really, really smart," Seitz said. "He could have used his knowledge to make a lot of money. Instead, he's using it to help his community. He wants to do the right thing."

Richard Chong, president of the Khmer Buddhist Society of San Bernardino, said the resource center is indispensable in helping Asian immigrants adjust to life in the United States.

The center started in a one-room office in downtown San Bernardino. It now sits in a 3,800-square-foot building south of downtown.

Sam was a young child when the communist Khmer Rouge took over Cambodia in 1975. They murdered politicians, intellectuals and others who they saw as part of a dangerous educated elite. They ordered residents of cities to move to the country in a plan to turn Cambodian into a fully peasant-oriented economy.

Sam's father and grandfather were early victims of the genocide. His dad was chief of police for the capital, Phnom Penh, and his grandfather was a one-star general, and thus immediately seen as enemies of the new regime, Sam said.

He, his mother, two brothers and two sisters were forced into the countryside to attend "re-education camps." His mother was seen as a lost cause, because she was older and seen as hopelessly corrupted. She spent her days doing backbreaking work in the rice fields.

The Khmer Rouge concentrated on children like Sam, whose minds were still malleable.

"They did a good job on me," Sam said. "If they had given me a gun, I probably would have shot people."

Yet even the vaunted children had to scrounge for food. Sam sometimes ate insects. One sister starved to death.

After Vietnamese troops toppled the Khmer Rouge in late 1978, Sam returned to Phnom Penh before escaping to a Thai refugee camp because of continuing instability.

He arrived as a refugee in Monterey Park in 1982. The second family he lived with moved to Rialto in 1986, and he graduated from Eisenhower High School there.

Sam is officially 36 years old, but believes he's probably 38 or 39. Workers at the Thai refugee camp he stayed at often put back children's ages so they would receive more education to make up for time lost in the camps, he said.

Sam barely knew his father, but he thinks of him often. His memory helps guide and inspire Sam.