AIDS education to rely on police 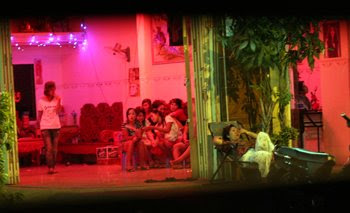 Police officers are to assume a central role in an effort to promote 100-percent condom use in Banteay Meanchey, which some observers say will render the effort ineffective

THE MINISTRY of Interior plans to retrain and deploy thousands of police officers as part of its upcoming campaign to promote 100-percent condom use in Banteay Meanchey province, the vice chairman of the National AIDS Authority told the Post Wednesday.

"What we have to do is to transform our officers to become ... educators who can teach others about HIV/AIDS," Tia Phalla said, pointing out that 50,000 police officers nationwide had received some form of education about the program.

The success of the effort, however, could be derailed by a major obstacle: Article 24 of the Law on the Suppression of Human

Trafficking and Sexual Exploitation, passed in February 2008, which criminalises sex work and has forced the Kingdom's sex workers away from brothels and into karaoke bars and beer gardens.

As Tia Phalla described it, brothels figure prominently in the proposed education campaign in Banteay Meanchey.

"To reduce the spread of HIV/AIDS, we have demanded that all brothel owners who have more than eight prostitutes arrange for HIV/AIDS education," he said.

But Ing Sothirun, deputy director of the Banteay Meanchey provincial Health Department, said brothels there had been shut down as a result of Article 24.

"Previously, there were more than 100 brothels in Banteay Meanchey province, but they were all closed down after the Anti-human Trafficking Law was introduced," he said.

In this respect, the case of Banteay Meanchey could serve as an example of what Sou Sotheavy, director of the Men's and Women's Network for Development, termed the "contradiction between the Anti-human Trafficking Law and the policies to protect people from being infected" with HIV/AIDS.

"We cannot make changes if the law is not amended," he said. "Sex workers will still be scared when the police enforce this law."

Sara Bradford, technical adviser for the Asia Pacific Network of Sex Workers in Cambodia, said the plan would be flawed even if brothels still existed in the province.

"First of all, it's completely unethical," she said, referring to the use of law enforcement officers as HIV/AIDS educators. "They go in, round up the girls, and people who round up the girls can't be the ones to go in and educate them."

In defence of the program
Dr Hy Someth, head of the Ministry of Interior's HIV/AIDS program, defended the education plan in an interview with the Post on Wednesday.

"What the ministry wants is to succeed in both condom use and anti-human trafficking law enforcement," he said.

"This campaign will not create any contradiction between brothel-based education and the Anti-human Trafficking Law," he said, adding that he believed law enforcement officials and NGO representatives should meet to resolve any disagreements about the proposed plan.

"I think we need to sit together and talk to find out common ways that we can work together because both sides want to succeed in their jobs," he said.

He added that he did not believe all of the brothels in the province were closed.

The fight against HIV/AIDS in Cambodia has been a fragile success story. The estimated prevalence among Cambodian adults in 2006 was 0.9 percent. But a 2008 UNAIDS report indicated that Cambodia's prevalence rate remained the second-highest among all countries in South and Southeast Asia (only Thailand's was higher).

More education and prevention work needs to be done, particularly in Banteay Meanchey, a border province with "seven or eight" casinos and many unregistered gaming entities that attract people from all over Cambodia, Ing Sothirun said. He said the large transient population had made it something of a "hot zone", plagued by problems related to drugs, human trafficking and sex work. He said 1,000 sex workers were in the province in 2007.

He said these challenges made the province a logical proving ground for the 100-percent condom use program, approved by Prime Minister Hun Sen in 1999.

"It will be easy for us to apply our work to other places in the country if we are successful in Banteay Meanchey," he said.