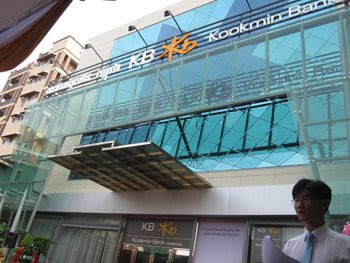 STAR Motors has gained an exclusive licence to distribute South Korean-made Kia cars, said the company manager. The company has imported 12 vehicles since March, priced US$29,900 -$37,500. “We have not made any sales yet, but a lot of people are interested in buying,” said manager Heng Channa. “We expect in the next two years we will be a leader in the branded car market.” He said the company is offering a five-year payment plan where buyers only need to pay 20 percent of the cost up front. Star Motors is selling the vehicles at its Hyundai showroom on Phnom Penh’s Russian Boulevard, which opened in March.
SAM RITH

Another South Korean bank launched operations in the capital Thursday, despite the global financial crisis and a local construction sector slowdown that forced many Korean firms to leave the Kingdom.

"Kookmin Bank Cambodia is the fifth commercial bank from South Korea [in Cambodia], whose total share capital is 100 percent held by Korean shareholders," said Chea Chanto, governor of the National Bank of Cambodia, at the launch on Thursday.

"I hope the bank will bring more cross-border experience, new innovation and impeccable financial products to meet the demand of customers," said the governor.

He said that as the supervisory authority for the banking industry, the central bank supports free and fair competition to ensure loans with reasonable interest rates.

"The National Bank of Cambodia needs bankers with entrepreneurial spirit and professional skills to contribute to the development of the industry, not just simple creditors who offer loans," Chea Chanto said.

Sohn Young Hwan, senior executive vice president of Kookmin Bank, said Thursday that Cambodia's financial sector is attracting interest in South Korea. "We are the lender in Korea, and we plan to extend the unit's customer base from local companies to Cambodian investors by introducing private banking and other retail services," he said. "We'll focus our loans on small and medium enterprises."

Launching Kookmin Bank Cambodia brings the number of commercial banks in the Kingdom to 25.

"There are a lot of commercial banks in Cambodia, but it is not too late for Kookmin to invest here because Cambodia is a developing country; Cambodia has just started to grow its financial industry," Woo Chi-koo, general manager of Kookmin Bank's global business department, told the Post.

"Thanks to our strong know-how and leadership, we believe that our business will expand."

He said that Kookmin Bank Cambodia is a joint-venture between Kookmin Bank Korea and Khmer Union Bank of Cambodia, with Kookmin holding a 51-percent stake. The venture was set up in July last year and changed its name to Kookmin Bank Cambodia. The rest of the shares are held by South Korean manufacturers including KTC Kyung An Cable, Taihan Electric Wire and Posco Engineering and Construction.

According to central bank rules, launching a commercial bank requires registered capital of US$13 million. All commercial banks will be required to triple capital to $37.5 million by the end of 2010.

More Koreans are ready to invest in Cambodia, but "the economic crisis and the strength of the US dollar caused many Korean investors to take a ‘wait and see' approach. Many of them are waiting for the won's value to increase," the South Korean embassy's Second Secretary Uhm Won-jae said Thursday.