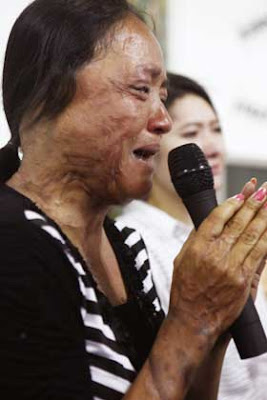 Acid attack victim Ya Soknim speaks at a press conference about the appeal against her attacker Chea Ratha in September. The Appeal Court overturned Chea Ratha’s acquittal on Friday.

HUMAN rights advocates called Sunday for a judicial inquiry after the Appeal Court overturned the acquittal of a former military police official for her role in an acid attack that left a woman scarred for life.

Former Military Police Brigadier General Chea Ratha, 43, and five accomplices were convicted in absentia on Friday, handed prison sentences of between 15 and 18 years each and ordered to jointly pay US$100,000 to the victim. All five, however, remain at large – prompting fears that they will never be brought to justice.

Sara Colm, senior researcher for Human Rights Watch, said: “One concern is that they have been found guilty but remain at large, and the victim’s relatives are still concerned for their safety. We need a big push from the top levels of government – and if not there, then Cambodia’s international partners – to go after the perpetrators and have them properly serve time.

“The Supreme Council of the Magistracy should monitor and discipline court officials who make decisions based not on evidence but on politics.

But the institution has been weak since its creation and has never called into question any controversial rulings. We hope the government takes this seriously, re-examines the case and does its best to track the offenders down.”

In May 2008, shortly after In Soklyda went into hiding, her aunt Ya Soknim was approached by two men on a motorcycle. One poured a litre of acid onto her face and chest, leaving her permanently disfigured.

During the yearlong investigation, Phnom Penh Municipal Court received evidence including recordings of phone calls in which Chea Ratha threatened to kill In Soklyda’s relatives; phone logs for Chea Ratha and her co-defendants on the day of the attack, and a report confirming that acid was found in the home of one of Chea Ratha’s associates. The acquittal, announced on August 31 and citing lack of evidence, was jointly condemned by human rights groups Licadho and the Cambodian Centre for Human Rights (CCHR).

Speaking on Sunday, CCHR Executive Director Ou Virak echoed calls for an inquiry. “We have six people convicted, but six people at large,” he said. “We have little hope they’ll serve their sentences. This was a missed opportunity to find justice in this case.”

Ou Virak said the case highlighted a “bigger issue” – problems with Cambodia’s courts. “There is much talk of independence, but the judiciary is not held accountable. It is systematically flawed,” he said. “The bodies tasked to monitor the courts are not doing their jobs, which is a big sign of political interference. The Magistracy is supposed to monitor and punish judges for corruption. The Supreme Council of the Magistracy should be in the spotlight. They should be investigated to see where things went wrong.” 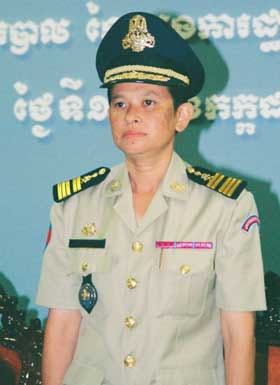 Chea Ratha attends a conference – the ex-Military Police official vanished before her trial, and her whereabouts are unknown.

Licadho director Naly Pilorge welcomed the ruling, but called on the judiciary to ensure that Chea Ratha and her accomplices serve their sentences. “This brutal crime is one of many cases committed by high-ranking officials or powerful individuals with impunity,” she said. “Chea Ratha had already committed the same crime on two other victims in the past without any consequences to her or her accomplices. This time, we hope officials will quickly find the six people to ensure they serve their prison sentence and as a way to provide a glimpse of justice to the victim and her family.”

Chea Ratha has reportedly been investigated for involvement in two other acid attacks, Chea Ratha, Meas Moa, 40, and Seak Chandy, 27, were each sentenced to 18 years for violation of an individual’s rights and intent to kill by premeditation. Ea Puthea, 33, Saing Nuth, 29, and Seak Sophal, 25, were each sentenced to 15 years in prison for conspiracy. The acquittal of a seventh defendant, Chan Dara, 34, was upheld.

Oung Vibol, Ya Soknim’s husband, said that although he welcomed the conviction, his family would live in fear until the perpetrators were behind bars. “My family will be scared so long as Chea Ratha remains at large,” he said.

Neither the Supreme Council of the Magistracy nor the Ministry of Justice could be reached for comment on Sunday.