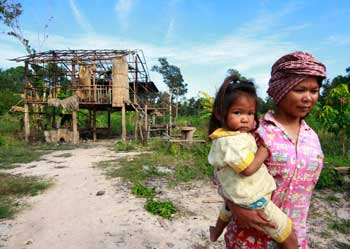 A villager from Kraya commune walks away from the ruins of a home. The community has been cordoned off from the outside world since November 17, when residents revolted against a looming eviction and set fire to several vehicles owned by a Vietnamese rubber firm.

VILLAGERS in Kraya commune said Sunday that they refused to thumbprint a document that would have opened compensation talks, prompting threats from authorities that a weeklong eviction delay would be revoked.

Community representative Pou Kin said that he and his fellow villagers’ reluctance to cooperate stemmed from mistrust.

“The people refused because they were afraid the authorities would play a trick on them once they got the thumbprints,” he said.

Sun Sithan, a 39-year-old villager, put it more bluntly: “We will not give our thumbprints because they will be used by authorities to say we agreed to relocate. They’ve come to negotiate, but we will ask them to stay in the village. It would be better to die here than to go.”

“Now we are waiting for the response from the villagers. If they agree to thumbprint the agreement to organise representatives for a meeting with us, we will not come to evict them. If they do not reply to us, we will start evicting them on Monday or Tuesday,” Pich Sophea said.

“If we did not come to evict them, the place will become an anarchy zone, and no one will be able to control them. We have prepared everything already; we are only waiting for a response from the villagers.”

Pressured to relocate since their village fell within a land concession to a Vietnamese rubber company in 2007, some 200 residents of Kraya commune turned to violence on November 16, burning four of the company’s excavators and other property before clashing with Military Police.

Since the incident, the village has been blockaded by police hoping to nab alleged instigators.

A November 25 eviction deadline passed as villagers still refused to leave – forcing authorities to postpone the eviction and offer negotiations.