Realization of the railway threatened - along six kilometres - which crosses the border between the two countries. The line should unite in Kunming in southern China to Singapore, along a path of 5300 km. End of work planned for 2015, for a total cost of 15 billion dollars. 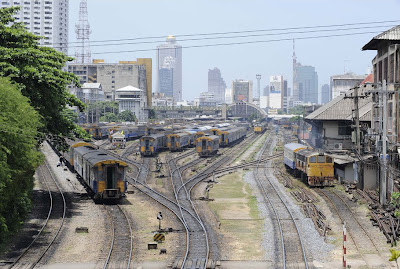 Phnom Penh (AsiaNews / Agencies) - The diplomatic crisis between Phnom Penh and Bangkok is seriously jeopardizing the completion of the Trans-Asian Railway in the area which will connect Kunming in southern China, to Singapore, along a path of 5300 km. The project of 15 billion dollars could vanish over just six kilometers: those needed to join Sisophon, Cambodia, to Aranyaprathet, Thailand.

Cambodian government sources, on condition of anonymity, told the South China Morning Post (SCMP) they understand the reasons why Thailand "does not to continue the project while there are ongoing hostilities." A manager of the Thai State Railways confirmed that "negotiations are ongoing," but the situation is deadlocked.

To undermine the project, the diplomatic crisis flared up between Phnom Penh and Bangkok after the decision of Prime Minister Hun Sen to take as Cambodian economic adviser former exiled Thai Prime Minister Thaksin Shinawatra sentenced to two years at home for corruption. The two countries withdrew their respective ambassadors. Following this a Thai citizen was arrested in Cambodia on charges of espionage.

The track that crosses the border between the two countries is reserved for freight traffic. The line along Cambodia and Vietnam is the most important part of the project, the completion of which is forecast for 2015. It represents the crossroads between the different rail lines and will serve to improve the Cambodian railway, in a strategic point for the entire region.

Paul Power, one of the engineers on the project, confirms that "it is difficult to imagine the completion of the work" if there is no stretch "along the border" between the two countries. "All this has implications at regional level" he adds, because "there is no point in the link between Ho Chi Minh City and Phnom Penh, without connection with Thailand."

The Trans-Asian Railway (TAR) is a project aimed at creating an integrated rail network for Europe and Asia, sponsored by the Economic and Social Commission for Asia and the Pacific United Nations (UNESCAP). The work got under way in the 60s of last century, with the aim of establishing a rail link - a 14 thousand km track- which could unite Istanbul with Singapore, that follows on to China.