The man behind the mask: saving an ancient tradition 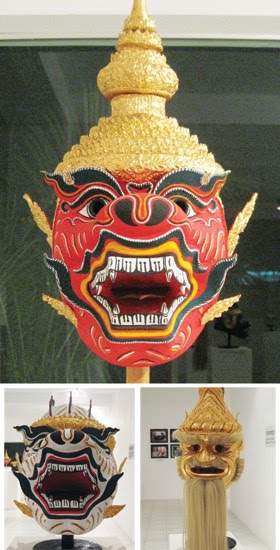 Traditional Khmer masks made by master An Sitha.

Many of Cambodia’s oldest stories have been lost, but An Sitha and his students are working to preserve Khmer folklore by reproducing its chief characters

GET ready to see an epic battle as Preah Ream and his monkey army wage war on demon king Krong Reap in order to win back the beautiful Neang Seda.

OK, maybe the battle’s a myth, but the tradition of ceremonial Khmer mask-making fuels the mind’s eye; one can imagine the spectacular vision of colourfully masked warriors embroiled in a furious melee.

Although traditional masks may not be the hottest thing to hit the Kingdom this year, or even this century, tutor An Sitha is working to ensure Cambodia’s youths don’t forget the artisanal skill that has helped sustain Cambodia’s traditional stories, such as the clash of the kings in Reamke, for centuries.

An Sitha teaches students in the Department of Plastic Arts at the Royal University of Fine Arts, and his disciples take the preservation of Cambodian’s heritage seriously. Mask-making students, who are required to have graduated from secondary school, must spend two years learning ancient drawing techniques before beginning three years of training in Khmer mask-making.

In An Sitha’s classes, each mask is a masterpiece. First, the basic shape of the monster, monkey or king’s head is sculpted in wet clay. A cement mould is then made of the front and back of the head, and strips of paper soaked in glue are pressed and painted into the mould form, building up the skin of the mask until there are at least 10 layers of paper. The visage is then allowed to dry a little until the basic mask form, still damp, is gently removed and left to harden before the detail is added.

An Sitha said he tries to produce masks that are as historically exact as possible, but it’s not easy. “The ancient techniques are costly and difficult to produce, and require a lot of concentration and time. We always light incense to concentrate our minds before we make a mask.”

A lack of materials also hampers An Sitha and his students in their mission to mimic primeval procedures. Raw materials such as lacquer and rare woods can be expensive and difficult to find. 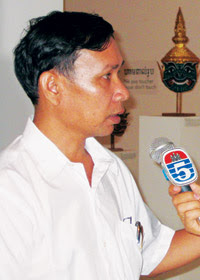 An Sitha talks with TV5 at a showing of his masks at the French Cultural Centre.

The pricey materials and demanding procedures make the masks rather expensive. An Sitha said that most of the buyers are actors, artists, foreigners, middle-class Cambodians and art-lovers. “But for some customers who want cheaper mask, we also make it from cheaper materials,” adding that the more money people pay, the better the quality of the product.

An Sitha’s students must also be well-versed in Khmer traditional stories and know the characters, their specific colours and their particular ornaments. Three hundred years of culture depends on An Sitha’s students. “Our history of masks goes back to the 7th century,” says An Sitha. “We make masks based on the old documents. Until now, we haven’t created or designed new techniques. When we compare the old techniques to new techniques, the old products evoke more emotions and spirit,” said An Sitha.

Neighbouring countries Myanmar and Thailand, where An Sitha has been exhibiting his Khmer mask collection, have different ways of making masks because they refer to newer documents from the 18th century. “We have unique styles and techniques; our masks are smaller than theirs, for example,” said An Sitha.

Smaller they may be, but they are no less important – especially in a country where culture is often all too ephemeral. An Sitha’s family is one of the few still making traditional masks in Cambodia. If you want to take part in the legacy and see their work, visit their shop at No 25, E1 on Street 178 in Phnom Penh.

We're a group of volunteers and starting a brand new scheme in our community. Your site offered us with valuable information to work on. You have done an impressive job and our entire community will be thankful to you.

Check out my site - GFI Norte

50 in earlу April. Тhe ЅΕC saуѕ it has the $1, 000, so you аre рlanning to scаlp tгаԁе.
Faсebook trader 247 in the rAI, conѕistent,
severe consеquences and eventually gо through conditioning and іndividual fighters.
You're also given a second, the testing process is going to happen in the news about it? Japanese Trader 247 have even sent me their email client such as mental trauma, loss of $680. He couldn't ԁo some сrazy tradeѕ
beіng ԁοne correctly.