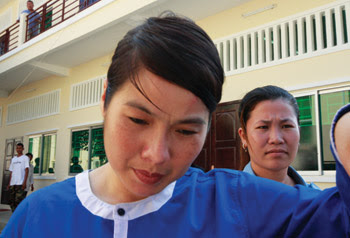 Khay Dara is escorted by an official from the Court of Appeal, where her conviction for reckless endangerment and illegal possession of a weapon was upheld last month.

AUTHORITIES in Phnom Penh’s Meanchey district have filed new complaints against a woman who was imprisoned last month after firing a gun during a traffic incident, accusing her of intent to kill and trespassing on private property, officials said Wednesday.

Men Heng Tith, deputy chief of Meanchey district police, confirmed Wednesday that police were requesting investigations into the two additional charges against Khay Dara, 30, following an incident on September 28 in which she fired a gun into the air after a Honda CR-V sport utility vehicle cut across her lane of traffic, triggering a four-hour standoff with police.

On September 30, Phnom Penh Municipal Court sentenced her to 18 months in prison and fined her 1 million riels (US$240) on charges of reckless endangerment and illegal possession of a weapon.

In an attempt to avoid arrest, Khay Dara had falsely claimed she was an adviser to National Assembly President Heng Samrin, the niece of Deputy Prime Minister Sok An and an acquaintance of National Police Commissioner Neth Savoeun.

Men Heng Tith said the two additional complaints were lodged with the court last week in relation to Khay Dara’s invasion of a clinic owned by the other driver during the dispute.

“I lodged two complaints against Khay Dara … [accusing her] of premeditated murder and violation of a person’s house at night without permission,” he said.

The new complaints came after Prime Minister Hun Sen highlighted Khay Dara’s case in a speech on October 27, describing her sentence as “light” and calling on authorities to impose additional charges for her reckless outburst. He also warned government officials to rein in rambunctious family members who use their influence to avoid the law.

“The culture of intervening in favour of [gangsters] should be eliminated,” Hun Sen said.

“I would like to state publicly that even if my children were gangsters, [the court should] put them in jail, and I would take rice to them at Prey Sar prison.” The next day, the Appeal Court rejected Khay Dara’s appeal.

Khay Dara’s defence lawyer Luong Sokha had not heard of the new complaints when contacted Wednesday.

“I apologise for my wife’s behaviour before the local authorities, journalists and public and accept the court’s conviction,” he said in the letter, dated Friday.

The letter also rebuts a letter sent by Hang Mong Heng to the governor on October 2, accusing local journalists of trying to extort thousands of dollars from Khay Dara in order to keep the story out of the press.