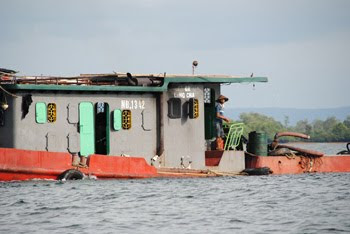 A sand-dredging worker sits aboard a barge owned by LYP Group in Koh Kong province in November.

VILLAGERS in Koh Kong province say they continue to suffer from large-scale sand-dredging operations in coastal estuaries, which they add have reduced fish catches and threatened the livelihoods of thousands of local fishermen.

Un Thanann, provincial coordinator for local rights group Adhoc, said that 1,200 families from Village 4 in Koh Kong’s Dong Tung commune had filed two complaints with local authorities since October, but have yet to receive a response.

“In all the fishing areas along the Tatai, Trapaing Roung and Sre Ambel rivers, there have been complaints by the fishermen that there are no more fish, and villagers need more petrol to travel farther to fish,” he said, adding that local authorities had appeared to ignore their complaints.

Set Vannak, a coordinator for the rights group Licadho, said that in numerous interviews with fisherman in different villages, he heard complaints that dredging had churned up the riverbeds and polluted the water. Oil from ships had also polluted the surface of the water, he said, forcing fish to seek cleaner habitats.

Fisherman Matt Sen, 46, from Village 4, said that two years ago he could net 100 kilograms of fish in just two hours, but that now he regularly spends up to seven hours on the water for catches of 2 kilograms or less.

“Our villagers here have been seriously impacted by the sand dredging,” he said. “Our daily living condition depends on the sea, and when the sea becomes polluted we will die.”

In March 2009, the Post reported that sand-dredging operations in Koh Kong were under the control of LYP Group – owned by CPP Senator Ly Yongphat – in partnership with the Hong Kong firm Winton Enterprises, which exported the sand to Singapore.

According to a 2009 sector profile published in a government-run online investment guide, three other local companies – Udomseima, Dany Trading and Regapo – have also been granted concessions to mine sand in Koh Kong under what the site says are tight government regulations.

“While sand-mining operations in Koh Kong province’s extensive salt-water estuaries remain small-scale, they are expected to have little impact on the local environment,” the Web site states.

Pech Siyon, director of the provincial Department of Industry, Energy and Mines, said authorities were aware of the villagers’ concerns and were “preparing a licence for a local company to clean oil from the surface water”.

He added that Winton wound up its operations last month, having fulfilled its export agreement with the government, and was “awaiting the renewal of [its] licence”. Only two companies – LYP Group and Udomseima – are now operating in the area, he said.

However, photos taken in Koh Kong in November and obtained by the Post show a recent flurry of dredging and transport activity in Koh Kong.

According to international shipping registries, several of the tug-boats and barges pictured are owned by Singapore-based shipping companies – including IMC Shipping and the Marco Polo Shipping Co – while others bear Malaysian and Vietnamese markings. One barge is marked with the names of HSC, a Phnom Penh-based dredging firm, and Cambosand, a small company based in Singapore.

Cambosand’s representative in Singapore could not be reached on Tuesday, while HSC staff in Phnom Penh had not responded to requests for comment Tuesday.