Safe and sound in new lock-up 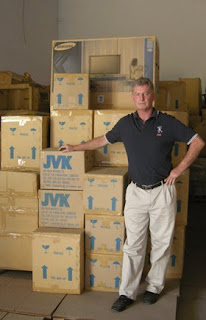 Chris Charlton, Cambodia branch manager for Bangkok-based JVK International Movers who plan to branch out into document storage and destruction, a field he reckons they have to themsleves.

CAMBODIA’S first document storage centre is being built in Phnom Penh in a bid to secure bank information, embassy papers and government data.

Costing an estimated US$35,000, a huge 450-square-metre warehouse on National Road 2 is being fitted out with $10,000 worth of floor-to-ceiling racks to be used by JVK International Movers, an Asia-based transport company which has its headquarters in Bangkok.

“People who use these kinds of facilities are accountancy firms like PriceWaterhouse Coopers, governments, embassies and banks,” he said.

“We think it is very much needed here. For instance, a similar facility in Bangkok currently stores around half a million containers. I hope to fill the 5,000 containers of documents by the end of this year.”

With no known competition, Charlton would like – in time – to extend the business to cover document destruction and storage of media tapes in fire-proof safes.

“Although Cambodia is quite relaxed, there are laws that certain documentation needs to be destroyed after being kept for a number of years. In Thailand, you need a certificate to certify that destruction,” he said.

“At this stage, I think we are going to offer a shredding service. From what I’ve heard, people here burn old papers.”

The data storage centre, called DataSafe, should be up and running by the second quarter of 2010. Containers will cost $0.30 to $0.40 a month to store.

JVK hopes that the low overheads involved in maintaining the warehouse, coupled with big businesses capable of putting up to 10,000 to 15,000 containers in storage, should prove a winning formula.

However, creating something so new in the Kingdom has been a challenge. Staff members, who will have to scale large ladders to reach files, still need to be trained on how to use the extensive bar-coding system. A marketing and business development manager also needs to be employed to contact would-be clients.

Finding a home for the papers was also difficult.

“It took two months to find this place,” explained Charlton, who is originally from New Zealand and worked for Crown Relocations for 24 years. “We needed somewhere secure with suitable foundations to cope with the weight of the papers.”

The new venture is an extension for the 14-employee branch, which moved office from central Phnom Penh in order to set up DataSafe.

JVK currently braves Cambodia’s roads to transport up to 100 containers of goods for embassies and homeowners from the Kingdom, through Sihanoukville’s port and Phnom Penh International Airport, to worldwide locations.

The company has to organise packing, transport, imports, exports and official documentation for every move. Customers have requested to move to countries as far afield as Bolivia.

“We guarantee 100 percent that we can get goods anywhere, but it can be a big headache if you are moving to the middle of the Ivory Coast.But we can have jobs in and out of Cambodia within a week,” Charlton said.

“Organisation is the main thing in this business. You have to dot every ‘i’ and cross every ‘t’.

“It is also important to provide a high quality service for imports, as they turn into our future exports.”

You get what you pay for

JVK operates in a crowded market of moving companies. Not only are there international businesses vying for the Cambodian market – namely Crown Relocations – but cheaper domestic transport groups provide competition too.

“But you pay for what you get. About 80 percent of this business is formed by international moves, which you can’t afford to get wrong,” he said.

He explained that costs of maintaining freight in international ports if boxes have not got the proper documentation can be huge.

“Thanks to the embassies, we haven’t felt the downturn here as sharply as in other countries. In fact, December was a good month for us,” Charlton said.