Together, we can stand strong 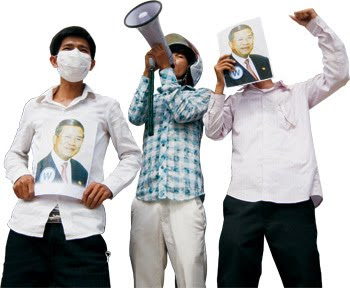 Students protest last year against admissions policies at the University of Health Sciences.

In the Kingdom's universities, young Cambodians are taking advantage of their strength in numbers through associations and other student groups that work to make life on, and off, campus more enriching for students

An effective way for students to make an impact in Cambodia is for them to join together to raise awareness and help solve the country’s problems. Within Cambodian universities, student associations have begun to take on this role, coming together to support their peers and working towards helping the Kingdom’s society as a whole.

His association tries to strengthen students’ knowledge through research and Internet use – which is necessary for them when they apply for scholarships abroad – and also to become engaged members of Cambodian society.

“Our university’s students association is remarkable in its ability to motivate students in studying, conserving culture and acting in social works, which are seen as a part of helping Cambodia move forward,” says Rouet Sokhon.

The university’s student association has 15 board members charged with providing advice and assistance, as well as participating in many activities to help the students.

Any student at RUPP is welcome to visit and ask for consultations with the board members.

RUPP’s student association, with funding from the Red Cross, normally works to conduct fund raising events to ease the lives of disadvantaged Cambodians.

Recently, the association had a fundraising event at the Institute of Foreign Languages for orphans in Kampong Speu province.

At other universities, student associations have the sole duty of boosting students’ potential in all activities in university and society, including raising funds, creating workshops and finding scholarships for students.

As president of the Student Senate at Pannasastra University, which has more than 90 members, Koung Sorita says her association has been going in the right direction, focusing on promoting the standard of education, enhancing Khmer cultural preservation and involving students in community service.

“To achieve this goal, our group has prepared workshops for students to get involved in developing the necessary skills to improve their studies, such as leadership skills, self-development and finding scholarships,” Koung Sorita says.

By regularly checking the development of students in her university, Koung Sorita says that they become more confident and begin to understand more about their studies, as well as life experiences after they have joined a student association.

“We have noticed that students seem to change their concepts and gain more courage, social skills and flexibility in studying, which the university alone cannot provide,” she adds.

Another challenge with student associations, Koung Sorita says, is their lack of publicity. Sometimes students in the university don’t even know they exist. So far, Cambodia’s student associations have not covered a wide range of activities or successfully informed university populations about their core values and mission, she says.

As a junior studying finance and economics, 23-year-old Keo Somaly has never heard about her university’s student association.

“I have watched films about foreign universities and their student associations. I’ve studied all along, but never heard about this group,” she says.

In many foreign countries, student representatives are present when university officials make decisions. Universities in the US, for instance, often have student representatives on the board of directors for the school, which guarantees transparency in the decision making process, such as how to use student tuition money. This is not yet the case at any of Cambodia’s universities.

Eng Limheng, president of the student association at the Royal University of Law and Economics, says his student association, created six years ago and now numbering 130 members, has had a vision to remedy students issues. So far, activities include finding scholarships, and holding workshops and programmes, with a broader meeting held monthly.

However, Eng Limheng says that he is not aware of the topics other student associations focus on, exposing the lack of cooperation between student groups within the country.

Just as students are more powerful when they work together, student associations have the potential to hold more sway when they join forces.

As a former representative of the student senate at the University of Cambodia, created four years ago, Chheng Sovannka says that student associations in Cambodia generally talk about donations, workshops, debate contests and study tours. Nevertheless, he says, each and every university should pay attention to student associations by providing more assistance and financial support because that is the only way to gain more of a following. “The student senate is getting more and more support from students,” said Eng Limheng. “This shows that they are braver and ready to start socialising with each other.”