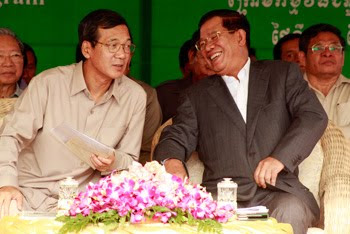 Prime Minister Hun Sen laughs with a colleague during the inauguration of a stretch of National Road 1 on Tuesday. In his keynote speech, the premier called for opposition leader Sam Rainsy’s arrest.

PRIME Minister Hun Sen warned Tuesday that he will not request a pardon for Sam Rainsy if the opposition leader is found guilty in a pending criminal trial stemming from an October protest against alleged Vietnamese encroachment on Cambodian territory.

“This time I would like to declare … there is no [pardon]. After the court convicts, let it be,” Hun Sen said during an inauguration ceremony for a stretch of National Road 1 in Kandal province.

“There are no more chances [for Sam Rainsy] to write a letter of apology to me. This time, there is no more [chance for pardon], sorry. Prepare yourself. We don’t regard him as guilty yet – [we] just say that if he is, do not rely on Hun Sen.”

The premier also defended the current demarcation of the Cambodian-Vietnamese border, and noted that foreign embassies and international organisations have not sprung to Sam Rainsy’s defence.

“Now who are the foreigners and embassies that support such an action?” Hun Sen asked the audience.

Sam Rainsy was charged last week with racial incitement and destruction of property by the Svay Rieng provincial court after he led villagers in the province’s Chantrea district in a protest last year.

During the rally they uprooted wooden posts on the Vietnamese frontier at border marker 185.

The court issued an arrest warrant for Sam Rainsy, who is currently in Europe, after he failed to appear for questioning at a hearing last week. Two Svay Rieng farmers have already been arrested in connection with the protest, while warrants have been issued for three more.

“As I listen to [Hun Sen], it seems that he is influencing the court,” Yim Sovann said.

The SRP released a statement on Tuesday alleging that Cambodian and Vietnamese authorities had conspired to remove other border posts placed near the site of Sam Rainsy’s October protest. In the statement, the opposition party claimed that the posts’ removal proved they had been installed illegally.

This action, the SRP claimed, demonstrated that officials from both countries knew that the border posts had been illegitimately placed on Cambodian farmland.

“Now realising they are on weak legal ground in the prosecution of Sam Rainsy and the concerned farmers, the authorities have surreptitiously resorted to do the same thing as Sam Rainsy did, ie removing illegally-imposed border markers, which is leading to a judicial imbroglio illustrating the political nature of the charges levied against Sam Rainsy,” the statement said.

Pov Pheap, second deputy chief of Samrong commune in Chantrea district, said Tuesday that the border markers in question had in fact been removed by Vietnamese authorities on November 16, the same day that Sam Rainsy’s parliamentary immunity was lifted, paving the way for the charges against him.

“Sam Rainsy just pulled out six wooden border poles and they accused him of destroying public property, but when Khmer and Vietnamese authorities came to pull out the others nearby, that was not illegal,” Pov Pheap said.

Var Kimhong, senior minister in charge of border affairs, rejected the claims made by SRP authorities but declined to comment further.