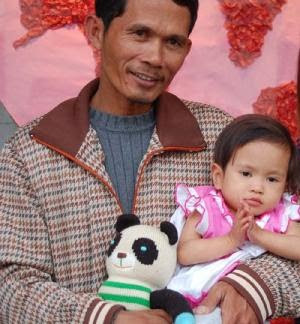 Socheat Nha and her father, Phin Ken. (Photo provided)
via CAAI News Media
By Greg Mellen, Staff Writer
Posted: 03/18/2010
LONG BEACH - The father looked at his 2-year-old daughter, who has a hole in her heart, and had to make the hardest decision of his life. But really, he felt he had no choice.
To move forward means throwing the child in harm's way by allowing her to undergo heart surgery with a very real chance of death.
To do nothing, leaves her to a slow irrevocable demise, measured in years, perhaps decades. She could live into her 40s or 50s or be dead before her 20s. In any case it's a life of progressive decline. Maybe just as bad, this choice means the death of hope.
This is what Phin Ken, an impoverished farmer from Cambodia, has had to wrestle with in the sleepless nights he has spent here in the United States. A journey that began with magical hope turned to despair and now has left him with a choice that has gnawed at his soul.
Peter Chhun, who brought the father and child to the U.S. recalls when Phin made his decision.
"He looked at me with teary eyes and said, 'Well, if I return her to the Cambodia without surgery, she will die. If I decide to go through the surgery, maybe I have a glimpse of hope."'
Ken chose to take the biggest gamble of his life and go ahead with surgery on his only child in the hope she can have a normal life.
The surgery is perilous with a 10 percent to 15 percent chance of mortality and no guarantees afterward.
To make this happen, however, Ken, his struggling family in Long Beach and a fledgling nonprofit in Long Beach need to find a way to pay for the procedure.
Already of couple of fund-raisers have been planned.
Ken and his daughter, Socheat Nha, were brought to the U.S. by Hearts Without Boundaries, which helps children with heart ailments receive life-altering surgeries unavailable in Cambodia.
Socheat suffers from several heart ailments, including a hole in her heart called a ventricular septal defect. In advanced countries such as the U.S., it is a condition that is repaired in infancy.
The ailment causes high pressure in the lungs from oxygenated blood flowing back into the lungs rather than to the rest of the body. Untreated, the ailment shortens life expectancy and is marked by increasing fatigue, breathing difficulty and cyanosis, or turning blue.
Initially there was hope Socheat would undergo serious but generally safe open-heart surgery to repair the hole. Hearts Without Boundaries brought two other children for whom hospitals have donated their facilities and staff, while the nonprofit arranged and paid for travel and living expenses.
That was supposed to happen with Socheat.
However, when she was examined by doctors in Las Vegas, they canceled surgery, deeming it too risky.
However, after a follow-up exam by San Diego cardiologist Paul Grossfeld, who initially examined the girl in Cambodia, another possibility emerged.
With Socheat's condition improved, Grossfeld conferred with Dr. William Novick, a renowned surgeon. Novick runs the International Children's Heart Foundation, which specializes in treating children with congenital heart defects in developing countries.
He also performs certain surgeries that won't be performed in the U.S. for a variety of reasons.
What Novick proposes is a more complex procedure he has performed and written about for the Society of Thoracic Surgeons. It is called a "flap valve double patch closure," which he helped design.
The procedure for children who already have already suffered damage from the lack of surgery early in life, uses a patch to repair the defect in the heart and has a second smaller patch over a hole in the first patch that can release when there is hypertension.
Grossfeld described it as being a kind of "pop off valve."
It is not the best scenario, but for children in developing nations with limited options for care, it's a last best resort.
As Novick wrote when describing the procedure, "In most sophisticated countries of the world, these pulmonary hypertensive events can be managed with either sophisticated pharmacologic agents ... or circulatory assist devices."
If Socheat lived in the U.S., Grossfeld said, she would likely be treated with medications to stabilize her blood pressure and oxygen levels until, hopefully, it would be safe to operate.
The emotion is evident in Grossfeld's voice when he talks about Socheat, in part because he knows that with adequate medical care early in life, her father would never have had to make such a heart-wrenching decision and she would not have to be exposed to such dangers.
Grossfeld's hope is one day he can help bring a cardiac lab to Cambodia so that hundreds of children with conditions like Socheat won't have to lived diminished and shortened lives.
Grossfeld said in the United States, 10 percent to 15 percent mortality rates are unacceptable, but for children like Socheat there are no other options.
"If you're Cambodian, you have to reset your expectations," he said.
According to the International Children's Foundation, about 1 percent of children in the world are born with heart defects. Only a third of them are diagnosed and fewer still are ever treated.
Novick, who has offered to do the surgery on Socheat, was unavailable for comment and traveling between India and Egypt to perform operations.
He has proposed treating Socheat in the Dominican Republic. Although Novick is donating his services, it will cost Ken, his family and Hearts Without Boundaries more than $10,000 for the hospital, travel to the Dominican Republic and lodging there.
Meanwhile, the father can only wait and worry about the future for his child.
"He looks confused but determined," Chhun said. "He says 'I have nothing else. I'm here, I'm here and I must go through this."'
greg.mellen@presstelegram.com , 562-499-1291
Posted by CAAI News Media at 12:08 am