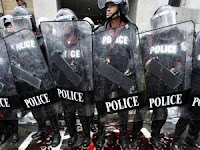 Source: Reuters
Thai riot policemen guard the home of Prime Minister Abhisit Vejjajiva after supporters of former premier Thaksin Shinawatra splashed human blood on the gates
Thousands of opposition activists fanned out across Thailand's capital in a bid to win the hearts of Bangkok's middle classes and recruit them for their anti-government campaign.
The red-shirted supporters of ousted former Prime Minister Thaksin Shinawatra moved through city districts, handing out leaflets saying "We love Bangkokians" and calling on urban sympathisers to join their push for new elections.
Wearing trademark red shirts, honking horns, singing songs and waving red flags, protesters on motocycles and aboard pickup trucks drove slowly in the 13-km long procession that paralysed traffic.
The rally got under way at 10am (4pm NZT), with organisers planning to cover about 46 km and finish at around 6pm (12am Sunday NZT).
"We want to invite Bangkok residents to oust aristocrats and the government," one of the red-shirted leaders said.
The week-long mass rally, which drew up to 150,000 people last Sunday, has so far been peaceful, boosting investor sentiment and helping to lift Thai stocks to a 20-month high.
Foreign investors have in the last month pumped 35.5 billion baht into the bourse, one of Asia's cheapest, much of that based on confidence that Prime Minister Abhisit Vejjajiva's government will ride out the storm.
Although fatigue and the sizzling sun has persuaded many protesters to return to their rural provinces, tens of thousands have remained in the capital for a rally leaders said would continue for at least another two weeks .
"We are asking Bangkok people to join our non-violent movement if they hate double standards and hypocrisy," Weng Tojirakarn, a protest leader, told the crowd on Friday.
The "red shirts" say big businessmen, royal advisers, army generals and court judges have colluded to undermine elected governments, and want people in the city of 15 million to join their rally and help return power to the people. They say the Oxford-educated Abhisit, who enjoys the backing of an influential establishment elite and the politically potent military, is illegitimate and should step down.
The "red shirts" believe that by broadening their support base, the mostly grassroots movement stands a better chance of prolonging the rally and bringing down the government.
Thaksin stigma
Blocked from his office and parliament, Abhisit has taken refuge at a military base. He insists the country is too divided to face a general election right now.
Analysts said the "red shirts" had earned many sympathisers in six days of non-violent rallies but face an uphill struggle to bring the politically powerful middle classes fully on board.
Many in the capital remain staunchly opposed to Thaksin, a former telecommunications tycoon derided by opponents as a corrupt autocrat who abused power to enrich his family business.
Pitch Pongsawat, a political scientist at Chulalongkorn University, said many residents sympathised with the movement, but chafed at the prospect of being labeled a Thaksin supporter.
"They have many followers in Bangkok, but these people are ambivalent because of the stigma of Thaksin," he said.
"The Thai media is their obstacle, it portray the 'red shirts' as blind followers of Thaksin, which means if you join them, you approve of Thaksin."
Thaksin lives in self-imposed exile, mostly in Dubai, and has delivered rousing video-link addresses to the "red shirts", many of whom brought him two landslide election wins and remain loyal because of his populist policies.
Posted by CAAI News Media at 10:46 pm