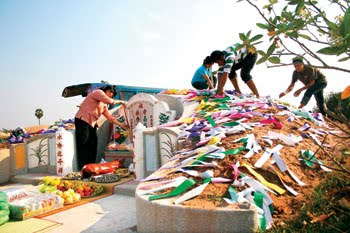 Photo by: Chheng Sambo
Seng Chanthouk and her relatives place paper strips on the graves of their ancestors in Kambol village, Kandal province.
--------------------------------------------------------------------------------
I participate in the festival, i can see that my ancestors help improve my life.
--------------------------------------------------------------------------------
via CAAI News Media
Monday, 05 April 2010 15:01 Chheng Sambo and Ngo Menghak
Today marks the end of the period dedicated to making offerings to ancestors.
ABOUT two kilometres outside the village of Kambol in Kandal province, down a dusty road and past the gate of Taphem Pagoda, is a rice field off to the right-hand side with what appear to be mounds of earth in the middle.
Most of the time these mounds are lonely and silent, but in late March every year they become the centre of attention for members of the local Cambodian-Chinese community.
During this period, small groups of people can be seen gathered around the mounds. Some of them use tools like hoes, shovels and sickles to clear the weeds away, while others attach colourful strips of paper to the newly exposed earth. Invariably, the smell of incense floats on the air.
Closer inspection reveals the reason for all the attention: The dirt mounds are actually Chinese graves, and during the annual Ching Ming festival family members gather at the site to make offerings to the spirits of their ancestors.
The Ching Ming festival, which traditionally lasts for about 15 days ending on the 104th day after Winter Solstice (April 5), is an occasion for younger generations of Chinese people to remember and honour their ancestors at gravesites by praying, sweeping the tombs, offering food and drink, and placing paper strips on the mounds.
The work of clearing the graves is usually done over the course of two or three days within the 15-day period of the festival, followed by the main offerings, which are made over three days at the end of the festival. Ching Ming, which means “clear and bright”, is so named because it occurs during a time of year when in some parts of China the air is generally thought to be clean and clear, and when plants and trees are at their lushest.
Seng Chanthouk, 42, who last week gathered with her relatives at the graves in Kambol village, said “thatching” the mounds with paper strips was like building a new house for her ancestors.
“It’s very important to thatch the tomb with paper strips because it’s like building a roof and decorating a new house for them,” she said.
“Without a new roof, the ancestors might get uncomfortable, and then we cannot live happily either. If there is no proper offering and preparation, my family will be blocked from running our business smoothly.”
She added that the paper strips are taken as sign that the current generation will continue to make offerings and observe the rituals needed to ensure that their ancestors will be remembered and revered. By extension, it shows that the current generation will likewise be honoured in the future.
Accompanying Seng Chanthouk last week was 35-year-old Aing Mouykea. As she knelt on the ground with three incense sticks in her hand, she explained that she never missed celebrating the Ching Ming festival.
“Every year after I participate in the festival, I can see that my ancestors help improve my life, even preventing me from getting sick,” she said.
“Placing the paper strips on the grave is not only like making a new roof or house,” she added. “It’s also like making a blanket to keep them warm because they stay outdoors all year.”
Kuok Cheng Heng, who oversees the Chinese graves in Kambol on behalf of the Ti Chiv association, said the Ching Ming festival has been celebrated since the Tang dynasty, more than 2,000 years ago.
He added that the event is similar to the Khmer Pchum Ben festival, which occurs in the 10th month of the Khmer calendar (around September) and during which people also provide food for their ancestors.
“Khmer Pchum Ben lasts for 15 days, so does Ching Ming. Both festivals also include visits to gravesites, but during Pchum Ben Cambodians also go to pagodas, whereas during Ching Ming Chinese people do not go to pagodas,” he said.
Posted by CAAI News Media at 9:20 pm