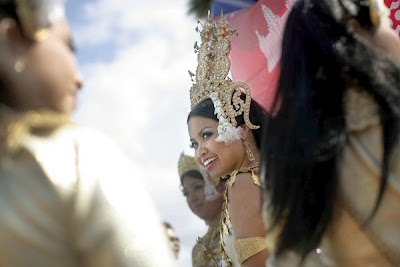 Wearing the traditional costume of a Cambodian apsara dancer, Natalie Buor, 21, who lives in Long Beach, waits for the start of the city's sixth Cambodian New Year parade. (Jay L. Clendenin / Los Angeles Times / April 4, 2010)
via CAAI News Media
By Corina Knoll
April 5, 2010
Dressed in a bright red uniform with a green scarf around his head, David Thong beamed Sunday as he kicked and punched an imaginary attacker while thousands watched.
The 43-year-old was leading a group of students in a demonstration of labokator, an age-old martial art, at the sixth annual Cambodian New Year parade in Long Beach.
Being able to publicly show off the Cambodian fighting technique on such a grand scale was a sign of how far the community had come, Thong said.
"We have the ability to show to the world that we live here now," said Thong, who arrived in Long Beach two decades ago.
For years, the Cambodian community in Long Beach, believed to be the largest outside Southeast Asia, has gathered to celebrate the Cambodian New Year, a three-day event that takes place in April. Census figures show 25,000 ethnic Cambodians in Long Beach, though community leaders place the figure at twice that.
In 2005, organizers added a parade featuring traditional dancers, drummers, pedicabs and colorful floats.
Beginning at Junipero Avenue, participants marched west on Anaheim Street to Warren Avenue, a one-mile stretch of restaurants, jewelry stores and markets considered to be the heart of what was designated the nation's first Cambodia Town in 2007. Afterward, Douglas MacArthur Park was swarming with families playing carnival games and listening to a woman singing in Khmer on a stage.
Phylypo Tum of the Cambodian Coordinating Council, which organizes the event, said the parade is a chance to showcase the history and customs of a burgeoning population that was established in the 1970s by refugees escaping the Khmer Rouge.
Tum said it was difficult to find sponsors for this year's parade. He hopes to cover its cost at another celebration on Saturday at El Dorado Park, at which admission will be charged.
Joe Som, 25, said he returns to his hometown at least once a week.
Having moved from Long Beach to Anaheim Hills earlier this year, he has found it difficult to be far from a neighborhood that represents his ethnic roots.
"We couldn't stay away," he said. "Each weekend we have to come down here. Long Beach just feels like home."
Som and his girlfriend, Makayla Seng, 26, attended the parade to cheer on participating friends and family.
"It's so new to the community that we want to support them," Seng said. "It's a big step, and it means a lot for us all to cooperate and put this on."
Chenda Yong, who immigrated to the United States in 1980 and grew up in Long Beach, has made a point of attending the parade since it began in 2005.
"It's about keeping an identity," Yong, 39, said. "It represents belonging and that we do have a place here."
corina.knoll@latimes.com
Posted by CAAI News Media at 10:30 pm