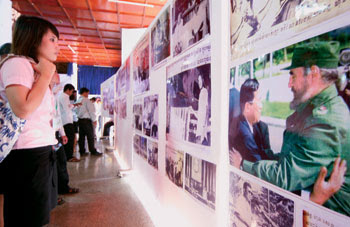 Photo by: Heng Chivoan
A woman views a photograph of Prime Minister Hun Sen and Cuban leader Fidel Castro at an exhibition at Wat Phnom Museum on Friday.
via CAAI News Media
Monday, 05 April 2010 15:03 Mom Kunthear
Shots chronicling Hun Sen’s political career to be displayed at Wat Phnom Museum this week
NEARLY 200 photos of Prime Minister Hun Sen have been put on display by the Cambodian Photographers Association (CPA) to mark the premier’s 59th birthday, the group said Sunday, as King Father Norodom Sihanouk issued a statement praising “the nonstop and continued night-and-day progress of the nation and the Cambodian people”.
Keo Nuon, secretary general of the Cambodian Photographers Association and a former reporter for Agence Kampuchea Presse, the government press agency, said Sunday that the photos, which chronicle the premier’s life and career since 1978, will be displayed at Wat Phnom Museum until April 9.
“This is the first time we have held a Hun Sen photo exhibition because ... I want to let the next generation know that it is not easy to be a country’s leader,” he said.
“The next generation should follow his example in their own lives, especially when leading in work, in order to receive great successes.”
Information Minister and government spokesman Khieu Kanharith said at the launch of the exhibition on Friday that it was not intended only to venerate the prime minister. “It is to address the young generation so they can understand the history of the great leader of Cambodia and his hard work from the collapse of the Khmer Rouge until today,” he told reporters.
The King Father has also issued his own personal birthday greeting to the premier, just days after arriving back in the country from Beijing.
“I and the Queen Mother have the pleasure to warmly praise Samdech [Hun Sen], the valorous, intelligent, extremely clever leader and the supreme nationalist who received great successes in all fields,” the ex-monarch said in a statement.
“May you receive other big victories forever, and may you be blessed with long life, class, good health and strength.”
Sam Rainsy Party spokesman Yim Sovann said Sunday that it was not right to focus on just one man when many other politicians had contributed to building the country.
“There are many politicians who have participated in protecting the country, and there are many nationalists,” he said.
Although Hun Sen’s birthday is officially recorded as April 4, 1951, his official biography lists August 5, 1952, as the true date of his birth.
Posted by CAAI News Media at 10:03 pm