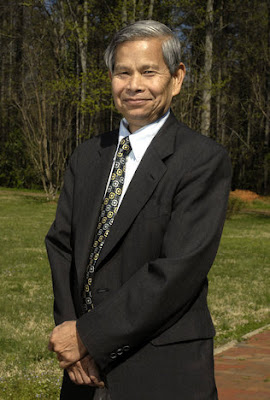 The Rev. Sam Om, 57, was sent to the Cambodian killing fields. TODD SUMLIN -
tsumlin@charlotteobserver.com
via CAAI News Media
By Tim Funk
tfunk@charlotteobserver.com
Posted: Sunday, Apr. 04, 2010
It was the mid-1970s. Sam Om had been sentenced to a slow death in a Cambodian work camp run by Pol Pot's Khmer Rouge rebels.
As a soldier on the losing side of a civil war, he worked from sunrise until dark, digging ditches and planting rice. He had little to eat. And he slept in the fields wrapped in a rice sack.
The law of survival was to shut up and do what you were told. Those who violated it were forced to dig their own graves, then beaten to death with a bamboo stick.
One day, he refused to get up.
Why are you so lazy? the guard screamed. Others are working!
Sam cursed him, then said: Kill me now.
The guard walked away.
Sam was sure he'd be executed after dark. But the night passed. Then another, and another.
Days later, Sam, a Buddhist taught to believe in reincarnation, had an epiphany: If I'm going to die, let it be outside Cambodia. That way, in my next life, I will not return to these killing fields.
Accepting Christ in the Philippines
In late 1978, when Vietnam invaded Cambodia, hundreds of thousands of refugees - including Sam and his mother and sisters - made their way to camps in Thailand.
While there, Sam's sister visited a Christian church and brought back a Bible, translated into the Khmer (Cambodian) language, for Sam.
He ripped out some of the tissue-thin pages to roll cigarettes. But he also read a lot of it.
One passage in the Gospel of John changed him. "God so loved the world that he sent his only son ..."
This God, he loved me, Sam thought. He loved not just humankind, but m e.
At a Baptist service months later in the Philippines, Sam stepped forward to accept Christ.
Listening to that inner voice
Sam reached the United States in 1981. His new ambition: Get rich.
But an inner voice whispered: I brought you here for a reason. Tell your people how much I have done for you.
Sam sensed the voice leading him - to Bible school in New York; to Syvany, his wife of 26 years; to the ministry.
Survivor preaching to other survivors
Now 57, he's pastor of St. John's United Methodist Church on Monroe Road, near some of Charlotte's Asian neighborhoods.
His 80-person congregation is mostly made up of Cambodians. Many of them also survived the murderous regime of Pol Pot.
Favorite Bible verse: Gospel of John 3:16. "For God so loved the world that he gave his only son, so that everyone who believes in him may not perish but have eternal life."
Where he'll be this Easter Sunday: Conducting the 11 a.m. service at St. John's United Methodist.
Posted by CAAI News Media at 8:39 am