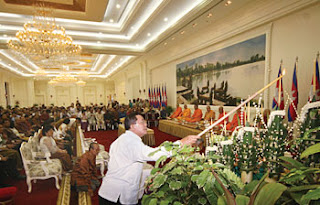 Photo by: Heng Chivoan
Prime Minister Hun Sen lights candles yesterday during a blessing ceremony inside his new offices adjacent to the Council of Ministers
via CAAI
Tuesday, 19 October 2010 15:02 Vong Sokheng
ABOUT 200 government officials joined Prime Minister Hun Sen yesterday in blessing his new offices as well as a Chinese-funded building next door that is currently being used by the Council of Ministers.
Heng Kimkun, a Buddhist layman from the Royal Palace, led the ceremony, which included traditional music and singing.
“It is a good day and an appropriate time, and I would like to invite all the magic guardians to come to bless the Peace Building ... and the Chinese Friendship Building of the Council of Ministers with peace, success and happiness,” Heng Kimkun said.
In 2009, the premier elected not to set up his offices in the Chinese-funded building because he was unhappy with its design, according to government officials.
Hun Sen did not make any statements during yesterday’s ceremony. In a morning speech, however, he warned that anyone entering either building would be required to turn off his or her mobile phone.
“Be aware that when entering that place, you must turn off cell phones ... because terrorists currently use cell phones as remote controls to detonate bombs, and they can also be noisy and disturb [people],” the premier said.
The new buildings were equipped with technology that can block mobile-phone service, he said.
Tith Sothea, spokesman for the Press and Quick Reaction Unit at the Council of Ministers, said the two buildings would be officially inaugurated today.
Deputy Prime Minister Nhek Bun Chhay said the ceremony was meant to ensure “peace and happiness, not only for government officials, but for the nation and all Cambodian people”.
Posted by CAAI News Media at 12:20 am