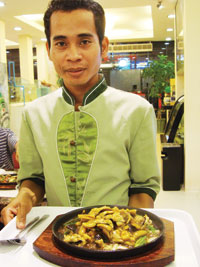 
via CAAI
Friday, 12 November 2010 15:00 Peter Olszewski
IT’S difficult to fully focus on the menu at the Golden Sand, Siem Reap’s newest flash Chinese restaurant, because attention is constantly diverted by a parade of waiters grappling with struggling live fish, netted from large water tanks at the front of the eatery and rushed to the execution chambers in the kitchen at the rear.
One waiter nets a pair of pale orange tilapia and scurries by. Next comes an odd-looking thrashing fish, which I’m told is a marbled sand goby that can be cooked in soy sauce for a mere $12.
Then another lad zips past with two pretty, delicately tinged green turtles guaranteed to give the PC contingent the wobbles.
Yet another waiter tries to lug his haul to the kitchen, but the writhing snake-like critter escapes his grip, albeit only momentarily.
It’s an eel, or as my dining companion Madame Chhout Chhout declares, it’s her dinner. Following its recapture, it will soon be served on a hot iron platter as “sizzling eel slices” ($5).
The slim eel, she says, is an ideal size because bigger, fatter eels don’t cook well and the flesh has an uncomfortable gummy consistency that makes it seem undercooked when it is, in fact, well cooked.
She babbles on about her eel, which is all well and good for her because she’s already ordered, whereas I’m still struggling; decisions, decisions. I try to concentrate on the comprehensive menu which is littered with bizarre exotica: Should I be adventurous and choose, for example, “stir-fried crocodile organs with celery and Jew’s ear ($8)?”
Perhaps not. Ditto the “crocodile paw with abalone sauce” ($18). Double ditto the “steamed bullfrog with medlar” ($6). Incidentally, from what I can understand, medlar is similar to the fruit known in Australia as loquat.
The fruit appears on several items on the Golden Sand menu, such as “steamed crocodile meat with dates and medlar” ($8).
I’m not sure exactly what “squilla” is, but it’s listed under the market price section which means it’s expensive, along with abalone in premium oyster sauce, shark fin soup and Chinese ginseng and mushroom.
Our friends the turtles also star in this section, rendered steamed. In fact, Madame Chhout Chhout seems to be an expert on the turtle front too, saying she used to catch them to eat as a girl in Svay Rieng province. But those reptiles were not like the pretty green ones in this restaurant, but rather a more superior dining turtle.
Well may she rave on about the tasty Testudines of her girlhood, but I am still undecided about what to eat.
Why does the menu have to be so damned difficult? Time to dispense with the exotica, and with the high priced “market value” items. Time to dispense with anything that involves internal organs, including stewed duck kidney at a very modest $3, too.
I briefly pondered roast pigeon at $8, and skipped the list of interesting prawn dishes. Meanwhile, Madame Chhout Chhout was talking at length about the restorative and medicinal properties of choice turtle meat. From this she segued into the medicinal qualities of spiders, adding that she only eats spiders from Skuon, not the overpriced weedy specimens sold in Siem Reap. In fact, she recently had spiders sent up from Skuon and gave most of them to her two nieces and nephew to ward off mild flu. The Skuon spiders are fried in reddish oil and Madame Chhout Chhout delights in telling how the oily residue on the kids’ fingers looked like blood. After they’d eaten the spiders, the kids ran around wiggling their fingers, resembling bleeding spider legs.
But why are we talking spiders? There are none on the menu. Luckily, the felicitously-named Golden Sand manager, Miss A. Fang, who had been patiently waiting by our table, delicately interrupted the spider story and recommended I opt for “fried squid with special sauce” for $5.
What a prize choice. The plump, juicy, super-fresh squid, which was neatly sliced and covered with the unidentified special sauce that looked like caramel gravy, had just a hint of hot spiciness.
Madame Chhout Chhout was elated with her sizzling eel, which also was coated with a piquant sauce that had just a touch of spice.
She declared it the best eel she’d ever had. And I declared the squid the best I’d had. Then we both declared that Golden Sand served the best Cantonese food we’d encountered in Siem Reap.
Golden Sand Restaurant is located on Sivutha Boulevard, Siem Reap (next to Angkor Market). Call 076 361 7979 for further details.
Posted by CAAI News Media at 6:32 am