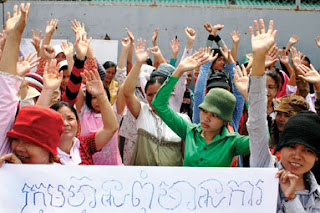 Garment workers hold a strike at the Sunly Fong garment factory in the capital’s Meanchey district in August. Photo by: Pha Lina
via CAAI
Friday, 12 November 2010 15:01 James O’Toole and Chhay Channyda
EMPLOYERS have taken disproportionately harsh measures against garment workers who participated in September’s industry-wide strikes, according to a report released yesterday by the Cambodian Centre for Human Rights.
Thousands of workers took to the streets in September to agitate for increased wages following a July decision from the Labour Advisory Committee, a body of government officials and industry representatives, to increase the industry’s minimum wage by US$5. In the aftermath of the strike, employers pursued lawsuits against union representatives involved, a move CCHR said was unjustified.
“While [the Garment Manufacturers Association in Cambodia] is entitled to raise questions about the unions’ compliance with the law, the reaction ... was not proportionate and in most cases could not be justified even if their claims that the strike was illegal were accurate,” CCHR said in a statement.
GMAC Secretary Ggeneral Ken Loo rejected the contents of the CCHR report.
“I don’t know what lawyers are advising them, and if they are lawyers, they ought to be shot,” Loo said.
Ninety-four workers remain suspended pending court rulings on the legality of September’s strike, according to the Coalition of Cambodian Apparel Workers Democratic Union. A total of 683 workers who later protested the suspensions of these representatives were dismissed after they failed to heed injunctions requiring them to return to work, the coalition says.
GMAC disputes these figures, saying that just 358 workers have been dismissed, with 67 still suspended.
CCHR said the unions gave ample notice of the strike, well clear of the seven working days’ notice required by the Kingdom’s Labour Law.
An August 19 letter threatened strikes in the absence of negotiations on the minimum wage, while a September 10 letter called for talks on a “living wage”. GMAC contends that this change represents a new set of demands and, coming just three days in advance, rendered the strikes illegal.
“GMAC’s argument that this [additional] letter re-started the notice period … is not persuasive,” the CCHR report says. “In both letters the actual wage being sought [US$93] was specified quite clearly and did not change. Nor did the dates or nature of strike action being threatened.”
Loo said, however, that the change of demands from minimum wage to living wage was “a significant change”.
“It’s not a slight change or a change of wording,” he said. “The difference for us is that the minimum wage had been decided by the [Labour Advisory Committee], and as such, we will not negotiate a new minimum wage outside the scope of the LAC.”
“When I read this, especially this part, it’s just a joke to me that they can claim that this is a slight amendment.”
In a September speech, Prime Minister Hun Sen called for factories to drop their complaints and allow workers to return to their jobs.
“There has been no proper solution for the workers who are suspended,” coalition president Ath Thun said. “The government has tried to negotiate to help the workers return to work, but GMAC and the factories will not listen to them.”
CCHR accused employers of trying to intimidate union representatives by filing complaints against them, and said complaints should have instead been filed against the unions as a whole. Loo said GMAC had declined to pursue complaints against the unions generally “as a sign of good faith”, but that individual factories had acted at their own discretion.
Posted by CAAI News Media at 6:49 am

Find really this Glossary of Simple Accounting Conditions continuing with the letter Deb on the subsequent page [url=http://www.lfxgj.co.uk/]short term loans[/url] uk short term loans Legal representatives and medical professionals can also use this type of mortgage, provided that that they intend to use clients which might be in underprivileged situations http://www.lfxgj.co.uk/