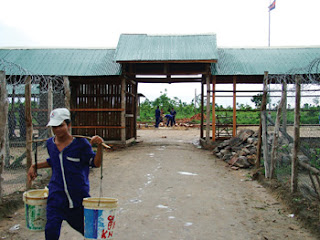 Photo by: James O'Toole
A prisoner carries water in June at Pusat province’s correctional center 4.
via CAAI
Thursday, 11 November 2010 19:28 Chhay Channyda
CAMBODIA came before the United Nations Committee Against Torture in Geneva on Wednesday, where a government delegation defended itself against claims from rights groups that the use of torture continues to be widespread in the country’s prison system.
The two-day hearing assessed Cambodia’s adherence to the UN Convention Against Torture, which it signed and ratified in 1992.
But a report compiled by local rights groups and submitted to the committee painted a dire picture of Cambodia’s adherence to CAT, documenting 108 cases of torture in police custody in 2009.
“The situation of torture and other cruel, inhuman or degrading treatment in Cambodia is still of concern,” the rights groups said in a joint statement. “The country’s legal and judicial system is unable to effectively prevent and punish acts of torture.”
In presenting a Cambodian report to the committee, Sun Suon, the Kingdom’s ambassador to the UN, defended the country’s progress on implementing the CAT provisions, saying “important steps” had been taken towards strengthening the Kingdom’s legal and institutional framework.
The recent adoption of a new Penal Code and Criminal Procedure Code would both lead to positive impacts on the fight against torture and other forms of ill-treatment, he added.
Sun Suon said the government gave “unfettered access” to the UN Subcommittee on the Prevention of Torture, which paid a surprise visit to the country in December 2009, and “demonstrated an exemplary openness to the discussion of its findings”.
An undefined crime
Although torture is punishable by up to 15 years in prison under the Kingdom’s new Penal Code, “torture” has no clear definition, which rights groups say complicates the prosecution of the crime.
In its report to the committee, the government claimed that such a definition was not necessary because Cambodia “abides by the principles of international conventions”.
During Wednesday’s meeting, committee member Felice Gaer noted the importance of having a definition of torture in domestic legislation and raised questions about what was being done to combat impunity for alleged torturers.
According to a hearing summary produced by the UN, Gaer pointed to the fact that the contents of the CAT were not widely known by judges, prosecutors and other legal officials and that “no international treaty had ever been invoked in a case in a Cambodian court”.
Committee members also question the independence of the judiciary and its effect on the prosecution of torture cases, asking how the state prevented the rich and powerful from exerting undue influence on judges.
In response to criticisms from committee members, Sun Suon also said that any assessment of Cambodia’s progress had to take into account the country’s cultural and historical context.
He said the government was “aware” of the shortcomings, many of which were the result of a lack of finances and human resources.
Khieu Sopheak, spokesman of the Ministry of Interior, yesterday questioned the testimony of torture given by inmates to rights workers.
“A thief never talks good about government officials,” he said. “The NGOs just raise small points and expand them into big things criticising the government’s efforts.”
But rights groups remain encouraged by the presence of a delegation at the meeting, only the second that has been held since Cambodia ratified CAT.
James Heenan, deputy country representative of the UN Office of the High Commissioner for Human Rights, said Cambodia’s presence was a sign the government was “taking steps to comply with its international obligations on torture”.
Am Sam Ath, a technical supervisor for local rights group Licadho, said the government should consider the recommendations of the committee as a means of improving the human rights situation in Cambodia.
ADDITIONAL REPORTING BY JAMES O’TOOLE
Posted by CAAI News Media at 6:11 am