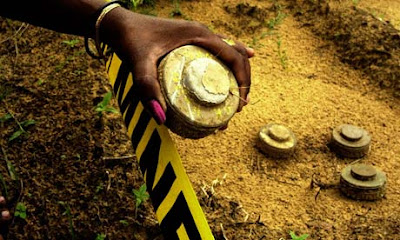 A female de-miner places a disarmed explosive device in the safety area at a minefield in Sri Lanka. Photograph: Julia Drapkin/AP
Britain is to fund landmine clearance in Iraq and step up operations in Sudan, Mozambique and other countries in a shakeup of how its £30m budget for the work is spent over the next three years.
Andrew Mitchell, the government's international development secretary, said today after visiting Juba in southern Sudan that the new focus would be on tackling mines where it would have the biggest impact on communities and local economies – for example by clearing fertile areas that could be used for farming.
UK-funded projects would release 250 hectares of land, destroying at least 30,000 explosive remnants of war, his officials said.
Countries that would benefit from Britain's project include Cambodia, the Democratic Republic of Congo, Laos, Sri Lanka and Vietnam.
The international development department (DfID) said the latest figures showed about 100 people a week were maimed or killed by mines and other explosives left over from wars. Improved surveying techniques meant it was now easier to target areas where mines potentially could do the most damage.
Mitchell said: "Mines are the scourge of ordinary people trying to make a living in post-conflict countries. It is particularly distressing that children are the second most likely group of people to be maimed or killed by mines as they may not be able to read danger signs and their natural desire to play takes over."
He added: "We can look to Rwanda, which was officially declared mine-free in 2010, as an example of what can be achieved through the bravery and diligence of skilled de-mining experts."
In south Sudan Mitchell opened a joint DfID/Foreign Office outpost ahead of next year's independence referendum.
The UK's moves were welcomed by the Mines Advisory Group, (MAG), an independent humanitarian organisation.
An estimated 4.8 million people are internally displaced in Sudan.
"Increasing numbers of these people – and the hundreds of thousands of refugees in neighbouring countries – are returning to their ancestral homelands, moving through contaminated areas as they do so," an MAG spokesman said.
Posted by CAAI News Media at 8:01 am