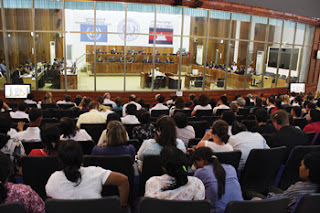 Photo by: Heng Chivoan
Spectators watch proceedings of the Extraordinary Courts in the Chambers of Cambodia from the public gallery in June 2009
via CAAI
Thursday, 11 November 2010 21:00 James O'Toole
LAWYERS for former Khmer Rouge Brother No 2 Nuon Chea have appealed to United Nations investigators to address allegations of political interference at Cambodia’s war crimes tribunal.
In letters dated yesterday that were also forwarded to Prime Minister Hun Sen, King Norodom Sihamoni and UN Secretary General Ban Ki-moon, the lawyers said all efforts thus far to address the issue of political interference within the framework of the tribunal had been stymied.
“Transparent resolution of the allegations at issue is a vital next step in the current proceedings,” the lawyers wrote to Gabriela C Knaul de Albuquerque e Silva, the UN’s Special Rapporteur on the Independence of Judges and Lawyers, and Surya Subedi, the Special Rapporteur for human rights in Cambodia.
“In view of the gravity of the matter, we believe a prompt reaction from your office would be in order.”
Subedi said in an email that he had received the letter and was “studying it carefully”, declining to comment further.
In their letters, the lawyers pointed in particular to a September decision by the court’s Pre-Trial Chamber in which the chamber’s two international judges called for an investigation of alleged political interference in the work of the court; the PTC’s three Cambodian judges, however, ruled that no investigation was necessary.
This ruling came following a request from the Nuon Chea team in relation to public comments made by Hun Sen and Information Minister Khieu Kanharith last year. Following attempts by the court to summon six senior government officials, the premier and the information minister publicly expressed opposition to the summones, which were ultimately ignored.
Further controversy came during a visit to Cambodia last month by Ban Ki-moon, when Hun Sen informed the UN head that he would not allow pending investigations in the tribunal’s third and fourth cases to move forward due to concerns about national security.
“Staunch, public condemnation by the Special Rapporteur of the current state of affairs at the ECCC would both spotlight the challenges facing the tribunal and send a strong message to the [government] that might move it to exercise restraint in the future,” lawyers Michiel Pestman and Victor Koppe wrote to Subedi and de Albuquerque e Silva.
Council of Ministers spokesman Phay Siphan called the letters “an insult to the Royal Government of Cambodia and an insult to the United Nations”.
“There are a few organisations that try to spit out obfuscation of information,” Phay Siphan said, noting that Ban and United States Secretary of State Hillary Clinton had applauded the work of the court during recent visits to Cambodia.
UN court spokesman Lars Olsen said defence teams were “free to do whatever they want and deem proper to ensure their clients’ rights”.
“Sending these letters is obviously part of their rights,” Olsen said.
Posted by CAAI News Media at 6:19 am