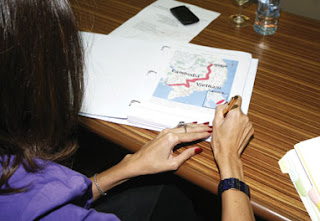 Photo by: Heng Chivoan
A woman looks at a Cambodian map during a meeting last week at the Council of Ministers to review bids for mapping the border.
via CAAI
Thursday, 09 December 2010 15:02 Meas Sokchea
BORDER demarcation efforts between Cambodia and Vietnam advanced yesterday when a joint committee ended its evaluation of five firms in a bid to draw up the shared boundary.
The Vietnamese-Cambodian Border Affairs Committee finished its review of proposals from five firms in competition to produce a new map of the border, and will make a selection by Friday, an official said.
“We are working on a draft contract that we will sign with the firm that is awarded the contract, which will be announced by Friday at the latest”, said Var Kimhong, the senior minister in charge of border affairs.
The committee saw proposals from BLOM Geomatics AS (Denmark), IGN France International, Kokusai Kogyo Corporation (Japan), Samboo Engineering Company (South Korea) and Pasco-FINNMAP (Japan/Finland). Costs, which will be split evenly between Cambodia and Vietnam, ranged in the proposals from US$1.5 million to $4.5 million.
However, the Cambodian Watchdog Council CWC, led by Cambodian Confederation of Unions President Rong Chhun, urged Prime Minister Hun Sen yesterday to postpone the delineation of Cambodia-Vietnam border posts, citing outcry by local farmers in Kampong Cham province that current border posts have ceded land to Vietnam by as much as 200 metres.
The request, submitted by letter, followed a visit by CWC delegates on Sunday to border posts Nos 108 and 109 in Memot district’s Da commune in Kampong Cham province, after 260 people had signed a petition complaining about a loss of farmland from Vietnamese border encroachment.
“To avoid losing territorial integrity, the [CWC] would like the Cambodian government to reconsider the planting of the border between Cambodia and Vietnam, and wait for an international inspection to show transparency for both nations,” the letter said.
Meanwhile, lawmakers from the opposition Sam Rainsy Party yesterday confirmed plans to visit border post No109 on December 14.
“We want to see the situation because people have complained to us as representatives about the planting of border post No109 affecting their land. We will see with our own eyes, so that we can take those complaints to parliament”, SRP spokesman Kimsour Phirith said.
Posted by CAAI News Media at 11:48 pm