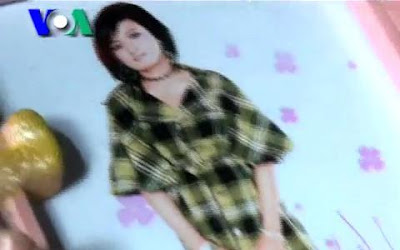 Photo: by Pich Samnang
Res Marina was taken to a private hospital that night, along with hundreds of others.
“He rushed back from Malaysia, but at the end of the day, he survived her."
Res Marina had dreamed of getting married next year. That dream was buried with her on Saturday.
The 23-year-old Cham woman died of internal injuries at Calmette hospital, where she had been since the Nov. 22 bridge stampede, becoming the 353rd victim. Nearly 90 others remain in the hospital.

“I didn’t expect her death, as the X-rays of her lungs initially showed that it was almost fine,” her aunt, Stan Mariyan, said in an interview. “But then the last result showed that her lungs had become so tiny, and her doctor shook his head.”
Stan Mariyan sobbed at her home in Phnom Penh’s Russei Keo district, as she recalled her niece, who had been orphaned along with three younger siblings when their parents died of illness and had been living with her grandmother.
The family had been living with help from an Muslim organization.
“She would rather buy thing for her siblings than for herself,” her aunt said. “She loved her brothers and sisters so much.”
“She never did anything to burden society or the neighborhood,” her uncle, Pao Kisann, said, wiping tears with a handkerchief. “Although she was an orphan and she had no money, she studied hard until she finished high school.”
“I just can’t imagine that she died so young,” he said. “She was just engaged and was to get married, but in the end she passed away.”
Like thousands of other Cambodians that night, Res Marina had gone out with friends to Diamond Island for the close of the Water Festival. Before she went out, she spoke to her fiancé, who had sought work in Malaysia. Two of her friends died at the scene of the deadly stampede, and Res Marina was taken to a private hospital that night, along with hundreds of others.
She was moved to Calmette hospital a few days later, and by then, her fiancé, Sou Rasaly, had flown back from Malaysia to be with her.
“Her fiancé cried so much as he was taking care of her himself in the hospital,” Stan Mariyan said. “He rushed back from Malaysia, but at the end of the day, he survived her. Who can contain such a painful feeling?”
Sou Rasaly said he had hoped his future wife would recover, especially after showing promise for the first few days. But his hope faded when he saw her in her hospital bed and noticed she had stopped breathing.
“Although I can’t marry her, I will consider her siblings as my in-laws forever,” he said, weeping and unable to say more.
Family members say that now, every night, Sou Rasaly sleeps amid the clothes of his lost fiancée and asks them when she will come back to him.
Posted by CAAI News Media at 7:06 am

What a data of un-ambiguity and preserveness of precious
familiarity concerning unexpected emotions.